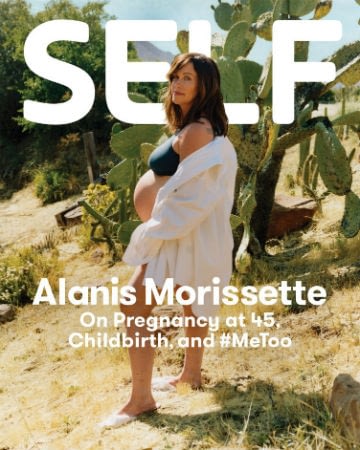 -I’ve been following Nicole Cliffe on Twitter for a while because she’s hilarious, and it turns out she’s also a pretty amazing feature writer. Her first big profile is Self’s digital cover with Alanis Morissette, and the result is a really frank, emotionally honest chat that delves deep into the singer’s pregnancies, labors and postpartum episodes. Morissette also talks about how her husband uses the concept of “provisioning” as a way of detaching money/breadwinning from providing for the family, and how her past traumas have informed her parenting strategy (“I talk about this with my kids a lot, the four boundaries being: You can’t tell me what I’m thinking; you can’t tell me what I’m feeling; you can’t f*cking touch my body/you can’t do anything with my body; and don’t touch my stuff”). Definitely worth your time.

-Speaking of cover stories that are worth your time, Janelle Monáe talks about trans rights in her new Paper interview.

-Another great profile is this one on Sienna Miller, who talks about the obstacles she faced early in her career and how the NYT did her dirty by referring to Jude Law as a “fling” and listing her alleged sexual conquests in a profile — but when they profiled Law they called her a “three-year relationship and engagement.”

-Is this Jeremy Renner tweet a joke? Because if he was really trying to transition into music, he would surely hire a professional to make a better video teaser than this. Right?!?

–Leonardo DiCaprio got hit in the face with a volleyball and Twitter came through with the jokes.

–Mindy Kaling‘s Late Night underperformed at the box office. Between this, The Long Shot and Book Smart, what a disappointing summer for smart, female-focused films.

–Cardi B gets as naked as you can appear in a video without getting banned from YouTube in her “Press” clip.

-Everyone is freaking out about The Office leaving Netflix, and how they won’t be able to stream it. Am I so old that if I love a show THAT much, I just buy the DVD boxset and not worry about never having access to it? I bought a season of TV last month that I will probably never take out of the shrink wrap, but I just feel better *knowing* I can. It’s also very strange that The Office and Friends have reached mythical legend status just because of their Netflix popularity with the young ‘uns. I would love for Netflix to someday give that sort of boost to less mainstream sitcoms like Happy Endings or Better Off Ted.

-This is sad: Dog the Bounty Hunter star Beth Chapman has died of cancer at 51.

-The Game of Thrones cast looks horrified when confronted with footage of their younger selves in the first season.

-In his anniversary post to Nicole Kidman, Keith Urban calls her “baby girl.” I read a book last week that I almost didn’t finish for no other reason than the protagonist’s boyfriend kept calling her that and I couldn’t deal with it because it came across as so infantilizing.

–This article on the making of Mad Men’s “not great Bob” meme is a treat, with Vincent Kartheiser providing the perfect kicker. (Sidenote: I was once an extra in a movie he was in. He was…something.)