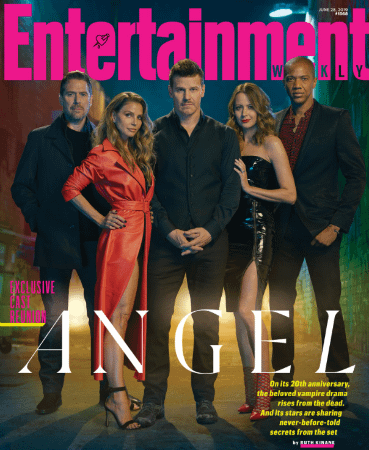 -I may have actually squealed out loud when I saw EW’s new cover in honour of Angel’s 20th anniversary. The story and video roundtable are both great — though it’s a little weird that they totally gloss over Glenn Quinn‘s death. And they completely ignore how terrible Joss Whedon treated Charisma Carpenter when she told him she was pregnant, and how she agreed to go back for the 100th episode only if they promised not to kill off her character — only to find out on the day of the shoot that they were killing her off.

–Claire Danes interviewed her My So-Called Life costar Wilson Cruz for Variety’s Pride issue. “We had a time.” *sob*

–Greg Berlanti talks about the old casting practices in Hollywood: “There were certain execs who would say, ‘Does this actor seem a little soft?’ They would use code words, but I knew what they meant because I was a gay person.”

-An Easy A spinoff is in the works. YAY!! (I reserve the right to rescind that yay if Emma Stone and Penn Badgley aren’t in it.)

-Ashton Kutcher and Mila Kunis set the record straight on their split rumors with a funny IG video.

–According to The Blast, Drake paid $350,000 to Instagram model to settle claim that the rapper forced her to perform ‘fetish’ oral sex that involved spitting into a measuring cup.

-This interview with Pamela Adlon about how she approached the last season of Better Things is so good.

-Cancel your plans! Seth Meyers will air a day drinking segment with Rihanna on tonight’s show!

-Speaking of Seth, this is a really great interview with him.

–Michael Sheen sharing Good Omens fanfic and defending it is a mood.

-Killing Eve and Fleabag creator Phoebe Waller-Bridge talks about being hired to add some depth and humor to the script for the new James Bond film. “The important thing is that the film treats women properly. He doesn’t have to.”

-This is a super cute video of Jennifer Garner doing charity work. I listened to her episode on the David Tennant podcast, and her work with Save the Children sounds like a fulltime job when she’s not filming, not the typical celebrity showboating.

-I really related to this article about “cord-clingers” — people who are getting more out of a cable subscription than the various streaming services.

–Kevin Sorbo being called out by his female costars on Twitter is glorious.

-I’m seeing Celeste Barber this weekend and I. Can’t. Wait.

–Tiffany Haddish, Eric Andre and Lil Rel Howery‘s new movie Bad Trip features pranks against real people. I hate this hidden camera stuff so much, I couldn’t even make it all the way through this.