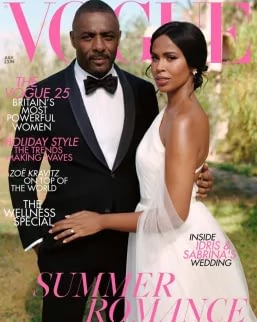 -As mentioned yesterday, Zoe Kravitz covers the new issue of British Vogue. As if that wasn’t awesome enough, newlyweds Idris Elba and Sabrina Dhowre cover British Vogue’s special wedding edition. We get a peek inside their ceremony in Marrakesh, and Elba talks about how he fell in “love at first sight” with Dhowre. “We’ve been literally inseparable since we met. You know, I’m 47 this year, been married and lived a full life before I even met Sabrina…It wasn’t something that I wanted to do, get married again. But…”

-Variety is publishing its latest round of Actors on Actors interview and everyone is buzzing about Ellen Pompeo‘s chat with Taraji P. Henson, in which Pompeo talks about the “toxic” culture on the Grey’s Anatomy set. “The first 10 years we had serious culture issues, very bad behavior, really toxic work environment…But after Season 10, we had some big shifts in front of the camera, behind the camera. It became my goal to have an experience there that I could be happy and proud about, because we had so much turmoil for 10 years.” Sandra Oh left in season 10, but it seems unlikely that she’s referring to her. Patrick Dempsey left in season 11, so maybe? (Marti Noxon weighed in with her experience with him on the set.)

-In the same chat, Henson talks about making the hard choice to leave a show that was “stealing my joy,” which seems to refer to Person of Interest.

-In another Actors on Actors interview, Julia Roberts tells Patricia Arquette about the the “gritty” first script for Pretty Woman.

-Wow. Warner Bros and DC have decided not to do big presentations at ComicCon this year. I guess we’re not going to get the chance to see Joaquin Phoenix awkwardly shill for Joker in Hall H.

-The trailer for Brad Pitt’s delayed Ad Astra has landed. It’s kind of awkward — and makes me wonder about all those blind items floating around about how there were worries he’d been miscast.