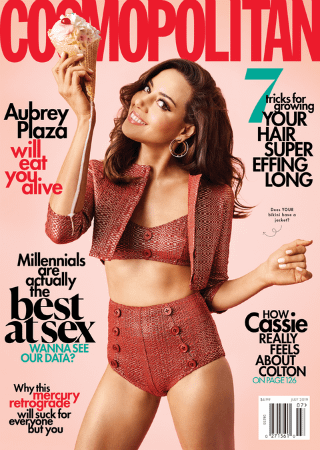 -While I hate the granny panty/diaper they put her in on the cover, Aubrey Plaza looks adorable in the inner pages of Cosmo. (This REDValentino dress is my fave.) In the interview, she talks about advice she got from her Parks and Rec costars (“Chris Pratt used to tell me when he would give me advice: ‘The separation is in the preparation.’ He’s one of those people who’s always very prepared. I was kind of the opposite. Clearly, it worked out for him”), and creating her own projects (“I’m so used to relying on this patriarchal idea of waiting around for someone to say, ‘You’—some brilliant man. I still have that voice inside my head that wants that. But it’s like, I’m 34. I can do it myself…I’m sick of doing other people’s shit. I want to do my own shit”).

-Forbes estimates Rihanna is the richest woman in music with a reported net worth of $600 million thanks to her music and Fenty Beauty.

-The Jonas Brothers have a new documentary, where they talk about their purity ring past. Joe says of the virginity symbols: “That was not who we were. It was just something that we did when we were young kids but we wore the rings through the first bit of the band starting to explode, at that point it was already too late because it was in the media.”

–Lady Rose Cholmondeley (aka the woman at the centre of all those Prince William rumours) attended the State Banquet last night, but while her husband got to walk in with the procession that included the Queen, the Trumps, etc. she did not.

–Christoph Waltz and Wallace Shawn have joined the cast of the next Woody Allen film, and as much as I hate cancel culture we might need to evoke it now for these two. (Allen’s already long cancelled, obvs.)

-Who says spoilers are harmful? After the end of James Holzhauer‘s winning streak was leaked, last night’s Jeopardy was the most watched episode in 14 years.

–Jon Hamm is incredibly charming in this interview clip with David Tennant. His little smirk at the camera after his says “always add an extra 1/2 inch.” 🤣

-The season of appreciating Keanu Reeves continues. I hope it never ends!

–Busy Philipps testified today in front of the House Judiciary Committee about abortion rights. “It is my body. Not the state’s.”