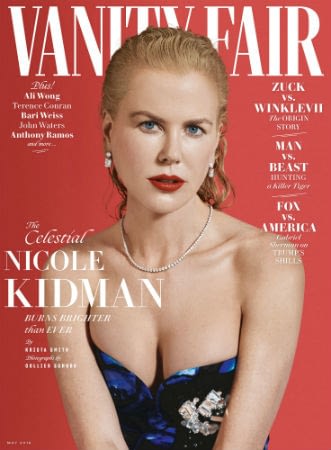 -In her 10th time covering Vanity Fair, Nicole Kidman talks about her marriage to Keith Urban (“It’s extremely simple with what we want from each other and what we want from a relationship. Just peas in a pod in that regard”), her kids with Tom Cruise (Bella is married and lives in London, Conner is in music in Miami), and how Meryl Streep slipped seamlessly into Big Little Lies’ close-knit cast (“There are no men in our equation. I mean, there are, but they’re not on the group chat, let’s put it that way. [Meryl is] and she’s very funny”).

-Early reactions to Avengers: Endgame are super positive, especially the film’s last hour which will apparently get us all up in our feels.  Box office-wise, it’s tracking at $1B worldwide ticket sales in less than a week.

–Natalie Portman was a surprise guest at the Endgame premiere, leading to everyone wondering if she makes a cameo.

-The best moment of the premiere’s red carpet was when Brie Larson surprised Tessa Thompson with a kiss.

-It finally seems to be dawning on Lori Loughlin that she’s facing some serious jail time.

-Sources in Britney Spears’ camp are telling People that no one is forcing her to stay at her wellness facility.

–Maisie Williams’ tweet about her controversial GoT scene is great.

-13 Going on 30 came out 15 years ago today. Let’s celebrate by rewatching the best awkward dance scene ever! Jennifer Garner’s post about the film, in which she celebrates her young costars, is very sweet. I also very much like this article on why it’s a better movie than Big. “‘Chick flicks’— as some like to call romance films that center on a woman—are never ‘refreshing’ or ‘poignant.’ Chick flicks, no matter how original they are, are ‘well-worn,’ ‘formulaic’ and ‘uninspired.’ Big gets to be on the American Film Institute’s list of funniest films of all time, while 13 Going on 30 gets dubbed a guilty pleasure.”

–Whitney Davis, an exec who worked at CBS for 13 years before quitting in February, wrote a column in Variety about the network’s “white problem.” And yet on the same day CBS said that they’ve suspended their search for a new CEO ’cause clearly the current exec team is top notch.

-Hurray! The Good Fight has been renewed for season 4. This current season is fire.

-Lizzo talking about drunkenly sliding into Drake’s DMs is giving me life.

–Whitney Houston‘s BFF (and maybe more?) Robyn Crawford is releasing a memoir detailing her relationship with the singer.

-Speaking of Netflix joints, Renee Zellweger cooks up an evil scheme in the trailer for Netflix’s new-noir show What/If.

What’s Next For Brangelina’s Custody Agreement?