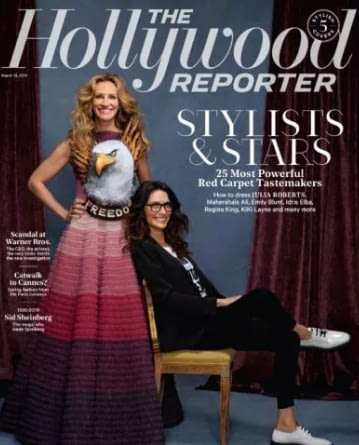 –Chance the Rapper is having a big week. Days after getting married, he announced he and his new wife are expecting another baby.

-It was Shazam day in Toronto (where the film was shot). The cast met fans at Yonge-Dundas Square before tonight’s screening.

-Speaking of superhero trailers, the new Avengers: Endgame trailer dropped this morning and when Captain Marvel appeared I made a noise I’ve never made before. It’s that good.

–Ben Affleck appeared on Ellen and finally admitted that his full back tattoo is not a myth.

–Colin Farrell was also on the show, where he and Ellen dressed up audience members as clowns. I love that he commented what “good huggers” they are. *swoon*

–Mark Ruffalo talked about those Noah Centineo comparisons on Fallon: “He’s way better looking than I was. Are you kidding me? I wish I looked like that.”

-Netflix cancelled One Day at a Time, which is bad enough considering how much money they’re throwing at everything else. But the fact that they tried to blame viewership numbers (which they didn’t release) and then sent a tweet that seemed to plead for sympathy pissed a lot of people off. It’s been a while since I’ve seen so many TV critics this riled up.

-Hallmark has fired Lori Loughlin from all future projects following her involvement in the college scam scandal. She starred on series When Calls the Heart and in the Garage Sale Mystery series of TV movies.

-After reading this article, I really want to go to karaoke with Christine Baranski: “If I want to have the ultimate high, it would be Diana Ross singing ‘Ain’t No Mountain High Enough.’ That key change.”

-Well, this is depressing. Gwyneth Paltrow has a larger influence on what Canadians eat than our own food guide.

-In a new interview, Charlie Hunnam and Garrett Hedlund talk about my favourite paparazzi photos of all time. “We were photographed wrestling in our Speedos on the beach in Hawaii, which is unfortunate. It just, like, became a thing.”

-Wayne’s World director Penelope Spheeris talked about why she quit the industry in a new interview: “Hollywood is a lonely, lonely desert, especially as a woman…I don’t need them. I really don’t. Especially now, what am I going to do? Work for a year on a movie and make $50,000? They can blow me! That’s a quote. You can print that.”

–Taylor Schilling has to deal with her juggalo-loving neice and her nosy neighbor Kate McKinnon in the Family trailer.

Blake Lively Was Attacked By Bees

Mary J Blige Is a Survivor