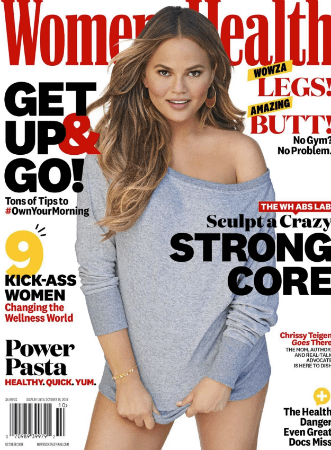 –Chrissy Teigen is on the cover of the new Women’s Health magazine, in which she opens up about her marriage to John Legend (“It doesn’t matter who you are—even if you’re a sexy R&B crooner or an ex–swimsuit model, you’re just tired! We still have that passion for each other, but are we doing it randomly in a dressing room? No!”), working out (“Sometimes I think I’m the weakest person, but I can plank for 20 minutes”), and her her struggles with postpartum (“After Luna, I was drinking too much. I wasn’t eating as much because I was full from drinking. I wasn’t being good to my body”).

-This is tragic: rapper (and Ariana Grande‘s ex) Mac Miller has died at 26, according to TMZ.

-People and EW’s puppy photo booth is one of my fave things about TIFF. Here’s Chris Pine cuddling a puppy.

–Pine‘s movie opened the festival last night, and all anyone can talk about is how you can see his dick. (It will soon be streaming on Netflix, so get that pause button ready!) He’s since spoke about the attention, saying “There’s so much beheading in this [movie], and yet people want to talk about my penis. It says something about our society where people can get disemboweled, but it’s the man’s junk that is of interest.”

-Sierra Burgess Is a Loser, which drops today on Netflix, is getting great reviews, with Time calling it a “smart, sweet rom com”, Indiewire saying it’s “totally delightful”, and EW making a case for it being the finale to a Netflix rom-com trilogy begun by Set It Up and To All the Boys I’ve Loved Before. This is a problem. I’m up to my eyeballs in TIFF stuff every night and won’t be home long enough for anything more than a few hours of sleep for the next 8 days. How am I suppose to squeeze this in? Or worse, pretend it’s not waiting for me on Netflix for more than a week?!

-Meanwhile, this is a good comparison of Noah Centineo’s characters in To All the Boys and Sierra Burgess.

–Meghan Markle wore a tragically ill-fitting dress and now everyone is speculating about whether or not she’s pregnant. (Personally, I think she just needs better tailoring. This is not a new problem when it comes to her wardrobe.)

–Cate Blanchett told a hilarious story about getting invited to a royal lunch, only to have to explain to Prince Philip how to set up his DVD player.

-Nine + nine! NBC is expanding its commitment to Brooklyn Nine-Nine. The network announced Friday that it has added five more episodes to its initial order of 13, bringing the total for season six of the Fox-turned-NBC comedy to 18.

–Geoffrey Owens has accepted Tyler Perry’s TV offer after the Trader Joe’s job-shaming. Perry was one of a number of Hollywood heavyweights to reach out to the former Cosby Show regular with a TV offer.

–Laura Dern and Steven Spielberg we reportedly some of the most vocal Oscar voters who were adamant about the Academy rolling back the “popular” category. Bless them.

-I’m really bummed that Peppermint is getting bad reviews (and might be kinda racist). I really wanted Jennifer Garner to have a win here.

–Post Malone is having a bad month. Just two weeks after his plane made an emergency landing, he totaled his car in a late-night crash.

-The case against Dylan McDermott will not go forward. He was accused of assaulting a woman in 1991, but prosecutors have declined the case, saying it’s beyond the statute of limitations.

–Vince Vaughn has been charged with DUI and failing to comply with the police stemming from his arrest in June.

-A new report reveals The Cranberries’ Dolores O’Riordan died of an accidental drowning in her bathtub due to intoxication.

-In Yashar Ali’s new report, multiple sources claim that after the 2004 Super Bowl wardrobe malfunction, Les Moonves was intent on destroying Janet Jackson‘s career to the point where he was talking about it years later and sharing how he was exacting his revenge.

–Matthew McConaughey is a stoner who parties with Zac Efron in the red-band Beach Bum trailer.