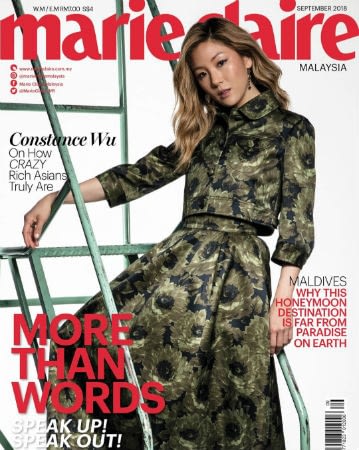 -Crazy Rich Asians star Constance Wu wears Michael Kors on the cover of Marie Claire Malaysia. She’s lovely but I didn’t even recognize her in that second photo (at first glance I thought it was Chloe Bennet).

–Jennifer Garner is poised to make a big splash with her Alias-reminiscent thriller Peppermint, so I really wanted her to BRING IT at the premiere. But this dress is a wrinkly mess.

-The Guy Ritchie-directed live-action Aladdin is reportedly doing reshoots because Disney wasn’t happy that they were using makeup to make the white actors look more Middle Eastern. So, they were trying to do brown face in 2018?!

-There was lots of good writing about the Louis CK comeback attempt yesterday, including from The Cut, The Daily Beast, and EW. I especially liked Rebecca Corry’s reflection on what has happened to her since she spoke out publicly about being one of his victims. But this account from two women who were actually at the show is a must-read: “It felt like there were a lot of aggressive men in the audience and very quiet women…There were at least four to five females that I could see, and three or four of them were not having it. They were just looking at him, deadpan, straight, not having it.”  Oh, and this little nugget: during his set he made a joke about rape whistles: “When he said ‘rape whistle’ people were laughing, and I was just sitting there like ‘oh my fuck.’ This is so uncomfortable and so disgusting. Everyone around me was laughing. That was just depressing.”

-Meanwhile, Michael Ian Black says he “hears all of your voices” in response to his Twitter defense of Louis CK, and has made a donation to two charities.

-Good on Gwyneth Paltrow for having a sense of humour about her “thinking about dick” meme.

-The second season of American Vandals may be about poo, but critics say the show isn’t shit.

-In a new podcast, Clayne Crawford reflected on being fired from Lethal Weapon TV show — and he’s clearly learned nothing. Instead of being humble and apologetic and trying to prove to prospective employers that he’s worth a shot, he went with this instead: “Hollywood is very sensitive, so I should not have screamed and yelled, right, because it’s a bunch of very delicate flowers out there.”

-Paramount’s high-profile Top Gun sequel – starring Tom Cruise and Miles Teller – is being pushed back a year, and will now hit theaters in June 2020 instead of next July.

–Ethan Hawke is not wrong about superhero movies.

-It sounds like Shaun Majumder’s departure from This Hour has 22 Minutes was not pleasant.

-Aww man, why is Amandla Stenberg having to defend her new movie Where Hands Touch? I *just* bought tickets to it! (It’s from the director of Belle so I have high hopes.)

-Yes to the tuxedo dress Meghan Markle wore to Hamilton.

–Rosamund Pike is addicted to war zones in the Marie Colvin biopic A Private War.

Reese Witherspoon Gets Her 4th of July On

Renée Zellweger Is Ready for Her Comeback