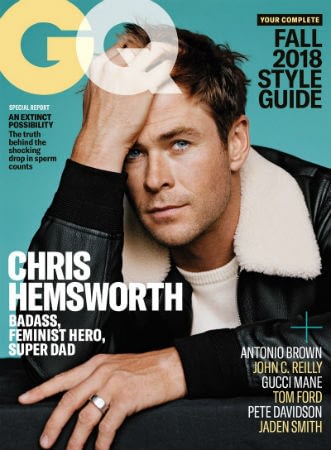 –Chris Hemsworth is out here coming for the title of Best Chris with this new GQ cover story. (I knew it was going to be good when the writer tweeted that she “female-gazed” him.) He talks about prioritizing his family over his career, faking knowledge about wine, and why he wanted to loosen up for the third Thor movie: “The first one is good, the second one is meh. What masculinity was, the classic archetype, it just all starts to feel very familiar. I was so aware that we were right on the edge.”

–Chris Evans also remains in the running due to tweets like this one.

–Winona Ryder revealed that she thinks she and Keanu Reeves might be legally married (“We actually got married in Dracula. No, I swear to god I think we’re married in real life. In that scene, Francis [Ford Coppola] used a real Romanian priest. We shot the master and he did the whole thing. So I think we’re married”). Not surprisingly, Twitter exploded at the news.

–Ben Affleck and 22-year-old Playboy model Shauna Sexton were photographed together again this weekend, so I guess that’s a thing.

–Zoe Kravitz‘s story about Prince being too clingy and crimping her style when she was 18 is great.

-Yay for Crazy Rich Asians, which posted a better-than-expected weekend debut of $25.2-$26 million and a five-day launch of as much as $36 million, the best showing in three years for a rom-com and the best showing for any comedy in a year. Nearly 40 percent of the audience was Asian, because representation matters.

-Meanwhile, this is a great tidbit of how How Crazy Rich Asians got Coldplay’s ‘Yellow’ for a key scene. Director Jon M. Chu wrote the band to say “[The word ‘yellow’] has always had a negative connotation in my life … until I heard your song.”

-In a new profile, Idris Elba talks about the “boundless ambition” that saw him go from “basically homeless” before The Wire to being invited to DJ this year’s royal wedding. He also talks about the surprise of proposing to Sabrina Dhowre, a model and Miss Vancouver 2014, despite previously swearing off marriage. “I just fell in love and want to be with that person for the rest of my life.”

-Forbes has released its annual Highest-Paid Actresses list, with Scarlett Johansson coming in at No. 1, and Gal Gadot making the cut.

–John Krasinski‘s new Amazon show Jack Ryan is getting decent reviews, which I’m surprised by for some reason.

-Should I be watching AMC’s Lodge 49? It’s been airing for a few weeks but feels like everyone started tweeting about it all of the sudden. Wyatt Russell is adorable, after all.

–Johnny Depp is claiming self-defense in response to that alleged on-set assault against a crew member. Ok.

-This is a good interview with Netflix’s VP of original programming about why their dramas are so often sluggishly paced (especially around the middle of the season) and why their comedies are more immune to this issue.

-These quotes from Michael Shannon on Trump are a thing of beauty.

-I knew I was going to love To All The Boys I’ve Loved Before. I just knew it. But I didn’t know that my entire Twitter TL would also become obsessed with it. Tweets like this one made me smile all weekend. Or this one, where the writer of the book posted about how she made the stars re-enact iconic romcom moments when she was on set. And now everyone is obsessed with Lana Condor (who carries the movie) and Noah Centineo (who is about to explode; LA Time calls him the next Zac Efron, he was in the “Havana” music video, and he’ll next appear in a Netflix romcom called Sierra Burgess is a Loser on Sept. 7). The fact that they keep leaving flirty comments on each other’s IG posts is a bonus.

-Meanwhile, I like this piece on the movie’s outfits, and this one on how only one production company didn’t want to white-wash Lara Jean’s character.

-I enjoyed this interview with Kieran Culkin, who is killing it on Succession.

Amber Heard Donates All Of Her Settlement to Charity

Hollywood Brightens Up for Vanity Fair