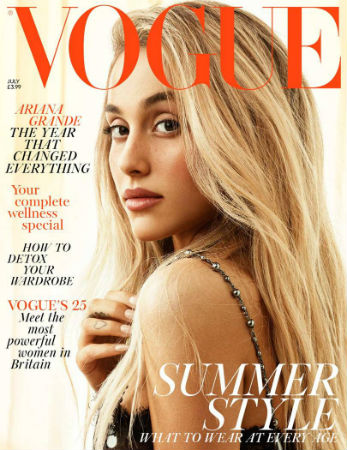 –Ariana Grande ditched her signature ponytail for the new issue of British Vogue. I love this look.

-In her THR cover story, Jessica Chastain says the premise for spy movie 355 was her idea — as was the notion that its female stars to be paid equally in a deal orchestrated by CAA.  “We independently financed it. And all five of the actresses own equity in the film. I love the idea about creating this movie and seeing that these women aren’t just people for hire”

–Sarah Paulson and Cate Blanchett‘s Today Show interview was 8 minutes of batshit chaos and I loved it. This is the most delightful video I’ve ever seen.

-The Ocean’s 8 premiere brought out another amazing pantsuit for Cate, and a killer Prada dress for Sarah. Sandra Bullock and Mindy Kaling didn’t fare as well.

-Meanwhile, the reviews are mostly good and it’s currently at 78% on Rotten Tomatoes. EW calls it “a light, summerweight gloss,” THR says it’s “more gloss and glitter than actual jewels,” Rolling Stone praises it as “summer escapism” and the NYT says it’s “a lot of fun to watch.” Even if it’s being slightly dismissed as unsubstantial, the one thing all critics seem to agree on is that Anne Hathaway totally steals the movie.

-Also, I’ve never been into the gossip-genie-ing (trademark Lainey) of Rihanna and Leonardo DiCaprio, but good on Ocean’s 8 for going there.

–Johnny Depp is “healthy” and “purposely lost weight because he’s on tour and is trying to stay in shape,” a source in his camp says.

-Everything old is new again. The USA Network is in talks to revive Temptation Island, while MTV is eyeing a reboot of The Hills.

-Mr. Robot’s’ Rami Malek and Sam Esmail are teaming up again for an FBI movie.

–Keiynan Lonsdale explained why he’s leaving The Flash and Legends of Tomorrow. I have the sads.

–Stephen Amell and his wife took a photo outside a mosque in Turkey, and he posted it with a lame dad joke caption. Not great, but not bad — until a Muslim fan pointed out that it might be insensitive. Then he got defensive and called them an idiot (twice!). I swear, this guy shows his ass every few months. Just hire a social media manager already, you fragile man child.

-Despite all the not-so-glowing reviews of the current season, Netflix announced that 13 Reasons Why will come back for a third.

-I always forget that Norman Reedus had a kid with Helena Christensen. Man, he punches above his weight, relationship-wise.

-After breaking both of his arms shortly into the filming of Tag, Jeremy Renner‘s arms were re-created using CGI. This story couldn’t get weirder.

-Like her or not, Kim Kardashian is changing the world. Trump granted clemency to Alice Johnson after the reality star’s involvement.

–Variety has apologized for its “egregious oversight” regarding the lack of female writers on their upcoming female TV writers panel and is adding new writers to make the mix 50/50. (I love that Mike Schur and David Shore both volunteered to be replaced with a woman writer.) Meanwhile, a counter-panel featuring female showrunners has been organized and will live-stream next Wednesday.

-The 10 Things I Hate About You composer says Joseph Gordon-Levitt helped score a scene.

-Proving that Hollywood white dudes can be excused for anything, Jared Leto is reportedly getting his own Joker movie.

-I’m not really someone who sees many animated superhero shows/movies, but the trailer for Spider-Man: Into The Spider Verse is kind of amazing. And the voice cast is bonkers: Hailee Steinfeld, Jake Johnson, Lily Tomlin, Liev Schreiber, Brian Tyree Henry and Mahershala Ali.

-I swear I have face blindness when it comes to Lady Gaga when you take away all the crazy costumes. I would have never guessed this was her in the Star Is Born poster or trailer.