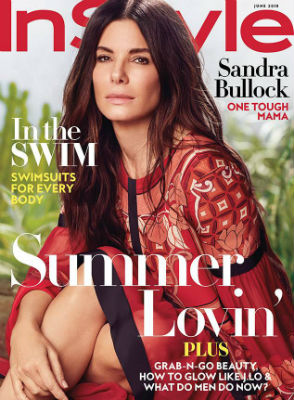 -The best part about Ocean’s 8 is that we get the cast doing lots of press, including Sandra Bullock, who is usually pretty private. In her new In Style cover story, she talks about getting Ocean’s advice from George Clooney, laughing at Sarah Paulson try to sing like Rihanna on the set, and why she wants to ban the term “adopted children”: “Let’s all just refer to these kids as ‘our kids.’ Don’t say, ‘my adopted child.’ No one calls their kid their ‘IVF child’ or their ‘Oh, shit, I went to a bar and got knocked up child.’ Let’s just say, ‘our children.'”

-We also get a Variety cover with Cate Blanchett, who talks about inclusion riders, Woody Allen, and fighting for pay equity. She also seems to suggest Harvey Weinstein harassed her, too.

–Elsa Pataky says she doesn’t know how she and Chris Hemsworth ‘survived as a couple‘ after he became famous. I don’t know how anyone famous does.

–Ellen DeGeneres apologized to Jenna Dewan for introducing her as ‘Tatum’ on her show.

-The Good Fight has been renewed for a third season. Now that Canada has CBS All Access, I’m wondering how long we’ll get to have that show on a regular TV network before they move it to the app here. With the exception of a very silly subplot about microsdosing, this current season has been incredible. I’m still not subscribing to yet another service for it, though.

-This tweet from Neflix about Lost In Space’s fandom made me LOL.

–Katie Couric defended Matt Lauer on Wendy Williams, saying “a lot of stuff gets misreported and blown out of proportion.” When asked about the button on his desk, she said “I don’t know what was happening, but a lot of NBC executives had those buttons that opened and closed doors. It was really just a privacy thing.”

-Apple gave a 10-episode series order to Are You Sleeping, a drama about a true crime podcast that stars Octavia Spencer and is produced by Reese Witherspoon.

–Lauryn Hill doesn’t seem super happy that Drake sampled her on “Nice for What.”

-It looks like the core cast of Suits  (Gabriel Macht, Patrick Adams, Rick Hoffman, Sarah Rafferty and Gina Torres) made the cut when it came to royal wedding invitations, as well as Victoria and David Beckham, Ben and Jessica Mulroney, Priyanka Chopra and Serena Williams.

-It sounds like the next season of Arrested Development will drop very soon.

-I’m having a really weird, emotional day because this video of Ariana Grande surprising fans with Jimmy Fallon made me tear up.  A producer later tweeted that even though they had enough footage, she insisted that all the fans who came got a surprise, so they kept filming for another 45 minutes.

-I thought the latest season of UnREAL was way better than the last one, but still not good enough to keep me tuning in. But that was before I realized that the next season is making Rachel the suitress! I’m so back!

The X Files Is Probably Going to Continue, Whether We Want It To Or Not