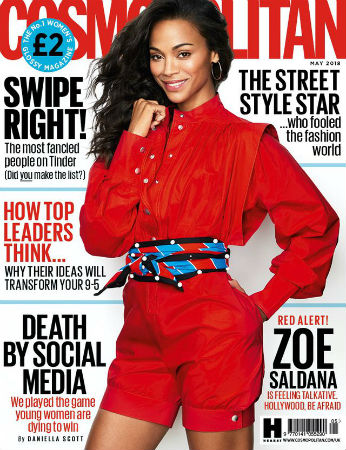 -This Zoe Saldana interview is aces. “I don’t want to hear another man tell me, ‘Oh you were my muse’. I don’t want to be your f**king muse anymore. I don’t want you to just post me on your wall and look at me. I want you to listen to me!” She also has not great memories of her first major role, which was in Pirates of the Caribbean: The Curse of the Black Pearl, saying the set felt “super elitist” and there were “a lot of people who were not so great.”

–Channing Tatum is denying rumours that his drinking and womanizing led to their split. “The media is fabricating stories and none of these accusations are remotely true,” his rep says.

–Ruth Negga and Dominic Cooper have split after seven years of dating (which translates to 54 years in Hollywood time). The set of Preacher just got a whole lot more awkward.

–Brad Pitt is rumoured to be spending time with an MIT professor. Can’t say I saw that one coming…

-The First Wives Club TV adaptation has scored a pilot order at Paramount Network. It’ll be written by Tracy Oliver  who did Girls’ Trip, so I have high hopes.

-On his future plans to make Indiana Jones more inclusive, Steven Spielberg says the main character could be a woman. “We’d have to change the name from Jones to Joan. And there would be nothing wrong with that,” he told the Sun, proving that he doesn’t really understand how last names work.

-Real Housewives of New York star Luann de Lesseps apologized for dressing up as Diana Ross — but wants you to know it wasn’t blackface.

-So are Lorde and Jack Antonoff still a thing or nah?

–Amy Schumer canceled an interview with a TV station owned by Sinclair, the broadcasting giant that’s been under fire for forcing its anchors to read politicized statements on air bashing the mainstream media.

-Here’s our first look at the Sabrina the Teenage Witch reboot starring Kiernan Shipka as Sabrina. Here for it.

-Miss me with your takes about how badly Casey Affleck has been treated during the Me Too movement.

–Blake Lively is trying to get paparazzi pictures of her daughter James at Martha Stewart’s Easter bash removed from websites. I hope she succeeds.

-This is a good thread on why Roseanne’s joke about Blackish and Fresh off the Boat crossed a line. I still don’t get why ABC would green-light that.

-I have never read the Y: The Last Man comic, but my entire Twitter TL is celebrating the news that FX is developing a show around it. So yay?

-Holy crap, Amazon’s Lord of the Rings TV show is getting a five-year commitment and a *billion dollar budget*.

-Avengers: Infinity War is predicted to have a monster $200 million opening. I bet it’ll track even higher before then.

Emma Stone Is Excited As You Are for BTS

Hello, It’s Adele on the Cover of Vogue