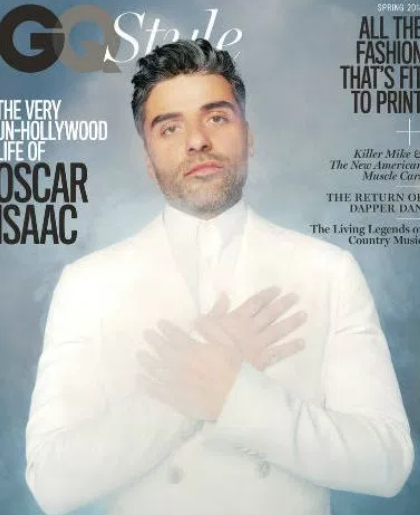 –Oscar Isaac has kept pretty mum about his marriage to Elvira Lind, but he opens up about it in the new issue of GQ: “At the time, right before it happened, my mom was ill, and so I saw her carrying my child, bathing my sick mom—seeing her do that, I just thought: I want to be with this person forever and ever.”

–George and Amal Clooney continue to be awesome, pledging $500K to the student-led gun-violence protest.

–Naomi Watts and Billy Crudup went public with their rumoured relationship at the BAFTAs over the weekend.

-Black Panther shredded box office records with its $218 Million holiday weekend opening, the biggest non-sequel film opening of all time. I adored it — I can’t remember the last superhero movie I saw in which I could immediately think of 5 side characters that I’d want to see a standalone movie about. There have been some incredible writing about it over this weekend, especially this New Yorker piece. I also liked this article about how it’s Marvel’s best movie, or how it’s the first superhero movie in a while that doesn’t fall apart in the third act.

-I also love how crazy supportive the cast is of each other.

-Meanwhile, Lupita Nyong’o and Michael B Jordan continue to flirt on social media and it’s giving me life!!

-The Walking Dead’s Lauren Cohan signed on for an ABC pilot. There’s still a possibility that the pilot won’t get picked up and she’s return to the show, but it doesn’t sound like she’s trying to play hardball or this is a negotiation tactic. AMC reportedly offered her “a modest salary increase,” she rejected it, and now she’s available for other gigs.

–Katie Holmes  will return to TV, playing an FBI agent on the new show from Ilene Chaiken, who produced The Handmaid’s Tale and The L Word. I’m surprised she ended up at Fox instead of a cable show or a streaming service.

-I can’t tell if these photos of Chris Martin and Dakota Johnson in Vancouver are staged, or if they just like to stare intently at each other while drinking smoothies…

–Anna Wintour took the only person who makes her look downright chipper by comparison to a fashion show: The Queen.

-I like Aubrey Plaza and I only want the best for her, but I can’t do another season of Legion.

–Joel McHale says that when he was hosting The Soup, his E! bosses told him to go easier on the Kardashians.

-Not surprisingly, Justin Theroux had been spending his last months with Jennifer Aniston in the guest house.

-I had no idea that there was speculation that Janelle Monae and Tessa Thompson  may be dating, but I’m here for it!

–Natalie Portman’s response to the notion that #MeToo is ending men’s careers is great: “Let’s talk about the vast art trove we’ve lost by not giving women, people of color, people with disabilities, and the LGBTQ+ community opportunities — let’s talk about that loss for all of us in art. Let’s talk about that huge hole in our culture. I don’t want talk about ‘Isn’t it sad that this person who’s made 500 movies can’t make movies anymore?'”

–Halle Berry and Daniel Craig play neighbors during the 1992 L.A. riots in the Kings trailer.

Jessica Mulroney Gets Called Out