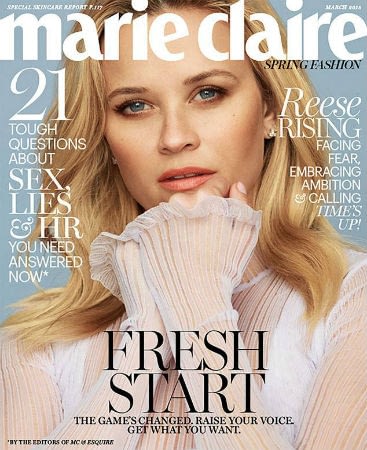 -In her new cover story for Marie Claire, Reese Witherspoon walks the walk by talking about how she’s focusing on producing female-driven projects, including a film she’s co-producing with Zendaya.

–Kim Cattrall  WENT OFF on Sarah Jessica Parker on Instagram this weekend after Parker offered condolences for the death of Cattrall’s brother. Responded Cattrall: “Your continuous reaching out is a painful reminder of how cruel you really were then and now…So I’m writing to tell you one last time to stop exploiting our tragedy in order to restore your ‘nice girl’ persona.” Here’s some history of the pair’s increasingly public spats over the past few months.  Though I’m clearly on #TeamKim (I assume most people are?) I also kind of feel like SJP was put in a terrible position when Extra asked her about the death. If she refused to answer, it would have been worse. She definitely doesn’t come out of the entire SATC saga looking great, but in this particular instance she was damned if she did, damned if she didn’t.

–Idris Elba got engaged this weekend and there’s video of him popping the question, just in case you really want to hate your life.

-The stunt coordinator on Kill Bill broke his silence to say he and his entire department were kept off the set on the day Uma Thurman filmed that scene. “At no point was I notified or consulted about Ms. Thurman driving a car on camera that day. Had I been involved, I would have insisted not only on putting a professional driver behind the wheel but also insuring that the car itself was road-worthy and safe.”

-A friend and I were talking last week about how in this #TimesUp moment we were surprised that no one has said “Hey, remember those old allegations/charges against Michael Fassbender? Or Christian Bale? Or Josh Brolin? Or Christian Slater?” Well, looks like Fassbender’s up first.

-Despite those sexual misconduct allegations, The Deuce is bringing James Franco back for season two.

–Taylor Swift has been burned by leaks before. So now when she wants you to hear an unreleased song, she flies an iPad to you, then flies it back, according to Ed Sheeran.

-Clear your calendar: the royal wedding schedule has arrived.

-This is embarrassing: A judge ruled that Zooey Deschanel — not her agency or manager — was primarily to blame for her not getting a film role.

-I have zero interest in ever seeing Fifty Shades Freed so I have no horse in this race, but I read two *hilarious* reviews about it that were polar opposites. Vulture praised it for breaking every convention of film-making (“No five-minute section in Fifty Shades Freed has any relation to the five minutes before it; the film just starts over. It’s Memento, but with butt plugs”), while Pajiba called it ad “ignorant, poisonous anti-feminist hate anthem” (“It’s like offering waffles for breakfast and then making the waffles out of misogyny and feces. Enjoy your god damn shitwaffle, America. You deserve it”).

–Zac Efron is shooting a Harmony Korine movie, and his beard is mesmerizing…

-Box office pundits keep raising the expectations for Black Panther, and now it’s expected to open at a massive $165M. We bought our tickets last week and couldn’t get 5 seats together, which is both awesome and kind of a bummer.

–David Duchovny thinks it’s premature for fans to be mourning Gillian Anderson’s departure from The X Files: “It’s a little cart before the horse, for me. It’s like, OK, there are issues to deal with or whatever, but let’s talk about the show. Let’s not talk about hypotheticals. To me, it’s unfortunate that’s kind of like ‘the headline’ because, to me, the headline is: We just made 10 really kick-ass episodes of television, and please enjoy and don’t mourn the death of this show quite yet.” (Read: I’m willing to do this show without her.)

Ben Affleck Sulks on the Cover of EW