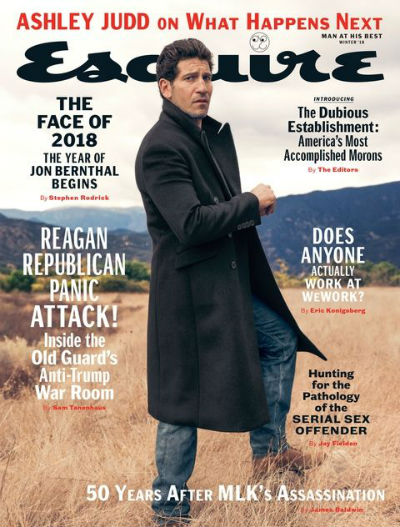 -I’m really having a week with Jon Bernthal. I listened to his Nerdist podcast (which made me swoon), he liked one of my tweets (which made me swoon even more), and now he’s talking about transforming himself into the man he’s always wanted to be in the new issue of Esquire (which basically made me swoon so much I nearly passed out).

–Emma Stone and Jennifer Lawrence are interviewed for W, and the video is pretty damn cute. They both found out that they lost pet turtles (“This is criminally undiscussed: turtles run away. Nobody discusses this, you have to keep your eye on your turtle”), and how annoying they are to others (“We just scream at each other. We’re both hoarse after we hang out. Oh my god, I can’t imagine what it must be like for other people. We should never hang out, only with each other.”).

–Gwyneth Paltrow‘s GOOP recommends irrigating your rectum and colon with coffee and doctors are all “yeah, don’t do that.”

-All of Ed Westick‘s scenes in BBC’s Agatha Christie drama Ordeal By Innocence are going to be completely reshot, with Christian Cooke replacing Westwick following sexual assault allegations. The series was originally due to air over Christmas.

-Uh oh. A civil lawsuit charging Oscar-winning filmmaker Paul Haggis with raping a publicist has prompted three additional women to come forward with their own sexual misconduct accusations. It’s worth noting that Haggis filed a lawsuit against one accuser three weeks ago, alleging it was extortion. A lot of people are wondering if this is the vindictive work of Scientology (which he famously took on), but on the flip side, there’s also this Thandie Newton story about how he mishandled her big scene in Crash.

-If you’re avoiding the cold this weekend, critics are loving on the dark British teen drama The End of the F***ing World, which is on Netflix.

–Donald Glover revealed that he and his girlfriend have welcomed their second child.

-Speaking of Glover, Atlanta will be back for its second season, a.k.a. Robbin’ Season, on March 1st. The Americans will return March 28.

-FX’s president John Landgraf told the TCA that Pamela Adlon will keep running Better Things, without Louis C.K. “It’s Pamela’s show. These are her stories, this is her life. She’s the creative engine of that show & that won’t change.”

– The final season of New Girl (which will only be 7 episodes) will debut April 10, with the series finale airing May 15. It will kick off with a funeral and a three-year time jump.

–Kristen Bell says they were incredibly close to getting a Veronica Mars limited series off the ground but “a couple of business things got in the way.”

-I’ve given up on Riverdale, but I’m totally here for Mad Men’s Kiernan Shipka starring as Sabrina in Riverdale’s new spinoff. That is excellent, excellent casting!

-Speaking of shows I gave up on, I couldn’t get through more than a few episodes of The Crown because I found it soooo slow. But then they cast Olivia Colman for the new season. And now comes news that Helena Bonham Carter will play Princess Margaret. Dammit!

–Justin Timberlake’s Filthy came out today, and I don’t hate it. I think I kind of like it? Ugh.  He also revealed the track list. Who’s AK? Anna Kendrick? Alicia Keys?

–Reese Witherspoon‘s first TV show for Apple will star Octavia Spencer and follows a murder case that’s reopened thanks to renewed interest in the mystery after a podcast about it goes viral. Serial’s Sarah Koenig will be a consultant on the show.

-It’s nuts that ABC had one of the best-reviewed broadcast comedies of the fall, and didn’t even give it a chance to find its audience.

-Speaking of network comedies, The Good Place returned last night and once again set up an entirely new narrative direction. I’m in awe of this show.

-On Wednesday, a day after Logan Paul uploaded his apology to YouTube and Twitter, he gains 80,000 subscribers. He reportedly made nearly $100k that day and gained more subscribers yesterday than the previous 2 days combined. And the disgusting videos from his trip to Japan just keep coming.

–Helen Mirren is in a horror movie, for some reason.

Bill Cosby Is a Free Man

Kumail Nanjiani Has His First Bite of Pizza in a Year