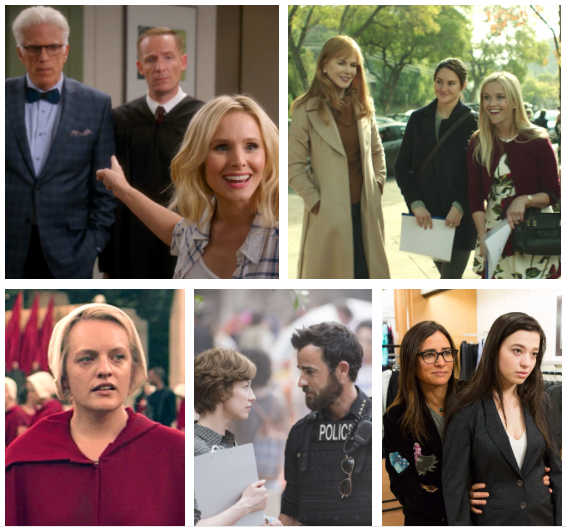 Another year, another pile of time spent watching way, way too much TV. With streaming services making big inroads and networks stepping up their game, audiences had more choice than ever before. We’ve sifted through the hours of television we watched to narrow down the shows that had the most impact on us this year.

The Good Place
I love that I have a network show on my list! We talk a lot about “prestige” cable dramas during this era of peak TV, but it was an NBC sitcom that left me wowed this year. The best part: it was a puzzle box series all along — we just didn’t know it! The season one finale (which aired in January) dropped a big twist (SPOILER ALERT): our beloved characters weren’t in the good place after all. Even more impressive than the shocking reveal: the second season has maintained the momentum by constantly re-inventing the show’s premise. Who would of ever thought that network that brought you Fear Factor would also air a show that regularly dives into deep existential and moral dilemmas? They even had a whole episode devoted to the trolley problem this year! –Jen

Big Little Lies
I found that this year was a return to appointment viewing. I watched each episode of Big Little Lies as it aired and found myself captivated. I read the novel several years ago and found it so unremarkable that I didn’t even remember who the “bad guy” was. But I thought that Reese Witherspoon, Nicole Kidman and Alexander Skarsgard were equally amazing in bringing these flawed characters to life. Reese with her daughters was especially powerful. Director Jean Marc Vallee’s vision for this beautiful town full of gorgeous people made for a strong contrast between surface and reality. The darkness hidden behind closed doors ran deep on this show and it made me wonder more than once what I might be missing when I look around my own life. There were a dozen amazing moments in this series but none as captivating for me as the first episode with Reese and her daughters sitting at the piano. I’m not sure why they’re bringing a second season to life as I’m fully satisfied with Season 1. —Nicole

The Leftovers
This show ended up on my Worst TV list during it’s first season, so imagine my surprise when it was far and away the best drama I watched in 2017. It was audacious, surreal and moving — not to mention it delivered one of the most stunning shots I’ve ever seen on the small screen. For a show that I once complained was too bleak and dour, the end of the The Leftovers was surprisingly life-affirming. There wasn’t one episode in its 8-episode final stretch that I didn’t like — which is a weird thing to say about a season that featured everything from an orgy boat to a penis scanner to a heartbreaking cameo by Perfect Strangers sitcom star Mark Linn-Baker as himself. —Jen

Master of None
I really enjoyed Season 1 of Master of None and was delighted at how different Season 2 was. I’ll admit to also overusing “allora” while in Italy much like Dev to charming effect (though I’m pretty sure we were far less charming than we thought we were). What I loved about this season was the balls-out chances Aziz Ansari took with some of the episodes. Some worked so well like “New York, I Love You” which was so different from anything I’ve ever seen on TV before and yet so amazing. I also thought that the way he integrated the romance with Francesca throughout the season while gifting us with episodes like “Thanksgiving” was lovely and less inwardly-focused than Season 1. I’ve rewatched several of these episodes and expect to come back to them many times more. —Nicole

Better Things
Being a pop culture fan in 2017 meant struggling to reconcile one’s viewing tastes with the involvement of Hollywood’s sucktastic men. I really considered throwing away Better Things due to Louis CK’s participation in it, but the truth is this season, directed entirely by its co-writer and star Pamela Aldon, spoke to me like no other show had. The episode about her mom’s rapidly worsening dementia broke me, the speech about being a “super single” felt like it was speaking to my soul, and the scene where she rejects a male friend who tries to kiss her made me howl. Like the BTS drama surrounding the show itself, season two was messy, complicated and challenging. —Jen

You’re the Worst
Yeah, I know, it wasn’t a great season for You’re The Worst but even a mediocre season of this show brings laughs, darkness and entertainment. My feelings on the entire season can be encapsulated in one episode: “Dad-Not-Dad.” I loved the Sunday Funday brunch re-creation where Jimmy is out-snobbed, and found the La Bamba dad moment for Lindsay charming and funny. This episode also had the worst, cringe-y moment when Gretchen makes sweet, sweet love to her boyfriend’s ex-wife. Yuck – I hated that for her character. The leading pair continues to live up to the show’s name and are as-ever The Worst and although it seemed more aimless than other seasons, I appreciated that the scope of the show was more focused on the main characters. —Nicole

Sweet/Vicious
People talk a lot about shows that aired “before their time” like My So-Called Life or Freaks and Geeks, both of which probably would have thrived had they premiered a few years later than they had. But Sweet/Vicious has the bittersweet tradition of not being years ahead of its time, but mere months. Just before the Weinstein scandal upended Hollywood, MTV canceled this smart, zeitgeisty teen drama that was the embodiment of the #MeToo movement. Though the premise of the show (two college girls take justice into their own hands by becoming vigilantes who track down sex offenders) sounds like it could be a downer, Sweet/Vicious was filled with a surprising amount humour and warmth. I miss it a lot. —Jen

Handmaid’s Tale
I had so much anticipation built up for one of my favourite books from a favourite author that I devoured this series in real time. The occasional night where my better half wasn’t around to watch live forced me to pretend during a second viewing that I was seeing the episode for the first time. (I even set up an elaborate second recording so that the PVR wouldn’t reveal my duplicity!) The season delivered everything I hoped for and I came to appreciate the second viewing each week. The episodes were tense and I walked away each week terrified and furious. I kept looking at what was happening in the real world and thinking that the Handmaid’s Tale made it feel sickeningly relevant. I didn’t mind the slight deviations from the book in the interest of building in a lead in to the second season. While Elizabeth Moss was utterly convincing as Offred, I found Alexis Bledel as Ofglen devastating. “The Bridge” is the episode that I come back to when I think of the series. It carried all of the emotions of the series and that tiny bit of hope that we need to keep us coming back. —Nicole

Claire Foy Is Having a Moment

Lindsay Lohan Is Ready For Her Comeback