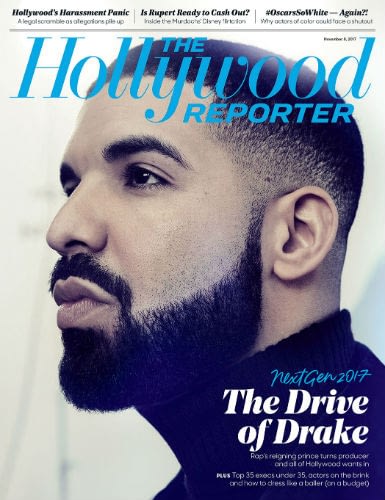 -Wow, there’s a lot to unpack in this Drake cover story. He talks about his ambitious push into Hollywood with Apple and Netflix, says he receives a script a week but still hasn’t found anything he wants to act in, gushes about Neflix’s Ozark, pines for first editions of Harry Potter books, and hilariously reveals that he has been collecting Birkin bags for years, a gift for “the woman I end up with.”

–Taylor Swift has a new album dropping on Friday and the lead up to it as been unusually shaky, especially for her. It’s interesting to note that social media-wise, she seems to have designated Tumblr as her safe space.

-Also, this article poses an interesting question: can a pop star afford to stay apolitical in our current climate?

-This is great. I kept clicking on the tweet thread thinking “who’s next?!”

-This profile on Sam Rockwell is wonderful — I love that he’s getting Oscar buzz for Three Billboards. His story about how Brad Pitt convinced him to take a supporting role in 2007’s The Assassination of Jesse James is pretty cute too.

-Teen girls definitively proved that Jack could have gotten on that door with Rose. Barry was right!

-Next year’s MET Gala theme is “Heavenly Bodies: Fashion and the Catholic Imagination.” I’m already scared. At least next year’s co-chairs include Amal Clooney and Rihanna.

-This is my favourite headline of the day: “Family opens front door and their jaws drop: It’s Matthew McConaughey, and he’s holding a frozen turkey!”

-The woman who accused Brett Ratner of rape in a now-deleted post appeared on Good Morning America.

-Aw nuts. The latest star to be accused of assault is Robert Knepper. A costume designer tells a pretty horrific story.

-Amazon is reportedly investigating a complaint against Jeffrey Tambor, though Transparent creator Jill Soloway seems to be in his corner.

-The Walking Dead’s Jon Bernthal says he was a fan of Kevin Spacey until they worked together on Baby Driver. “I thought he was a bit of a bully. I didn’t really care for the way he was behaving toward some of the other people on set.”

-Former Boston TV news anchor Heather Unruh spoke at a press conference Wednesday, during which she said Spacey sexually assaulted her son in Massachusetts when he was 18 years old. “There was no consent…when [Spacey] was out of sight, a concerned woman quickly came to my son’s side and asked if he was ok…She told him to run.”

–Ed Westwick and his girlfriend, Jessica Serfaty, were reportedly ‘looking at engagement rings‘ before his sexual assault scandal broke. I’m guessing they have other things on their mind now.

-Meanwhile, attention has turned to talent agents and publicists about their inability (or unwillingness) to protect their clients.  Actress Rae Dawn Chong reveals how her career dried up after a terrible meeting with Steven Seagal. “Kevin Huvane was my agent. Did I call him after and tell him what happened and say how violated and f**ked up it was? Yes. And did CAA take the position of, ‘We’ll protect you’? No. It became, ‘Rae Dawn Chong’s difficult.’ And it did impact my career. Obviously, I left CAA promptly, because it was like a pimp situation.”

–Chadwick Boseman is the superhero lead we deserve.

-I feel like not enough people are talking about Blade Runner’s huge losses.

Adele’s “Easy On Me” Video