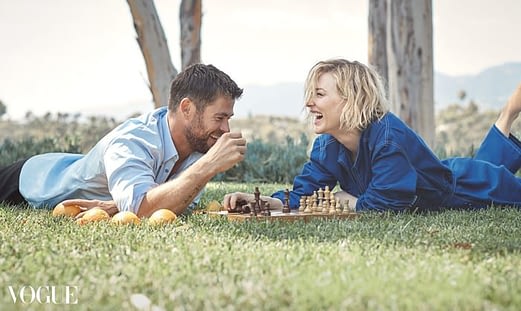 –Cate Blanchett and Chris Hemsworth look like a romcom come to life in the pages of Vogue.

-Meanwhile, Cate slays in this speech: “Just because we want to look sexy doesn’t mean we want to fuck you.”

-My friend Russ wrote a great piece on how Justin Timberlake has to publicly apologize to Janet Jackson. It’s long overdue.

-Do you think Kristen Stewart would let me live with her? Because her new NYC loft is beautiful.

-Onetime Weinstein assistant Zelda Perkins has become the first of the producer’s former staffers to break her NDA in an explosive interview with the Financial Times. She says he exposed himself to her, asked for massages, requested she watch him bathe, and repeatedly tried to pull him into bed with her. She claims she quit at 24 when he sexually assaulted a female colleague during the 1998 Venice Film Festival. She left the company with a £250,000 settlement after signing an N.D.A. (which she was not allowed to keep a copy of) following 12 hours of questioning by Weinstein’s lawyers that ended at 5 a.m.

-Super lawyer Gloria Allred held a press conference this afternoon, in which a former Weinstein production assistant told a graphic story about her alleged assault. I can’t imagine him escaping criminal charges at this point…

-I’m really glad that people in Hollywood are speaking out on the rampant sexual harassment, but I’ve gotta say…I kind of don’t need to hear any more from Matt Damon. (Unless he changes his tune and says something along the lines of “I didn’t want to rock the boat of my newfound fame” and/or “I should have realized that if he did it to Gwyneth, he was doing it to others” and/or “Here are the names of others who should be called out.”)

-Since the James Toback story was published on Sunday, 193 additional women have contacted the L.A. Times to talk about the director.

-Speaking of directors with a history of allegations, the Daily Beast did a deep dive into tales of David O. Russell’s groping and on-set abuse.

-Hollywood’s creep cleanout continues. Amazon’s Joe Lewis, head of comedy and drama development, is leaving the company amid conflict of interest allegations that he cast his girlfriend, Jane the Virgin actress Yara Martinez, in the streaming service’s scripted drama The Tick.

-The actress/fixer who set up Sean Penn‘s meeting with druglord El Chapo  is telling stories — much to Penn’s chagrin.

–George Clooney remembers how his dad would sit with him when he worked at a liquor store to prevent the place from being robbed.

–Meghan Markle‘s half-sister is writing a memoir called The Diary of Princess Pushy’s Sister. Between this and her ex-husband, she has a lot of garbage people in her life trying to make a buck off her.

–RIP Robert Guillaume. I loved this remembrance of him as an amazing leader on Sports Night. This speech still gives me chills.

-Wait, Fringe’s Anna Torv is in Mindhunter? Why aren’t I watching this thing?!?

–Helen Mirren is haunted in the first trailer for Winchester: The House That Ghosts Built.