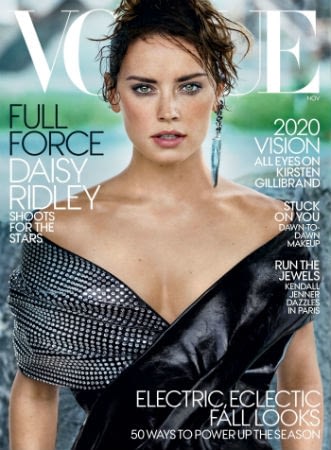 -Another actress has come forward with a story about Harvey Weinstein, recalling a time when she was forced to kiss him.  Minka Kelly also shared her own creepy Harvey story. So far, 34 women have accused him publicly of inappropriate behaviour, with even more speaking out against other men in power.

-Meanwhile, Ryan Gosling released a statement, saying he is “deeply disappointed in myself for being so oblivious to these devastating experiences of sexual harassment and abuse.”  Tom Hanks also spoke up, calling Weinstein “an ass.”

-Also, Emma Thompson is being praised for speaking out in this video interview, in which she says “I spent my 20s trying to get old men’s tongues out of my mouth, so I would imagine that happens very regularly. Perhaps this is a moment where we can say to men and women: Open your eyes and open your mouths, and say something.” Ben Stiller tweeted “Emma Thompson is right and all of us men need to get the reality of what it is to be a woman in show business and the world.”

–Oliver Stone (who also has a problematic reputation) defended Weinstein, and his comments are not going over well.

–George Clooney is denying claims from an ER actress that he helped get her “blacklisted” from Hollywood after she complained about harassment on the show’s set.

-I appreciate what Rose McGowan is trying to do with today’s Twitter boycott, but many people have raised the very valid point about how there was no boycott over Twitter’s treatment of Leslie Jones or Jemele Hill.

-Speaking of surprise baby news, Carey Mulligan has confirmed that she had a second child a while ago.

-I don’t watch Once Upon a Time, but it’s probably a really bad sign that the star and the director filmed the season finale cliffhanger and had no idea what was going on.

-Speaking of actors being left in the dark, The Game of Thrones cast reportedly won’t even receive scripts for the final season of the series.

-Did Ben Affleck tag Jennifer Garner in for a little image rehabilitation this week?

-I love that the scene of Armie Hammer dancing in Call Me By Your Name is already going viral.

-This is a really bad look for Jimmy Fallon — and also pretty tone-deaf, considering that Kimmel is killing him in the ratings because he’s not afraid to get political.

-The Riverdale season premiere doubled (DOUBLED!) its ratings from last year, which is pretty stunning considering how broadcast TV is going these days. It’s most likely because everyone caught up with it on Netflix over the summer.

-It’s Friday the 13th, so Netflix dropped a new trailer for Stranger Things 2.

-Oof — am I just jet-lagged or does the trailer for the new X-Men movie look really, really bad?