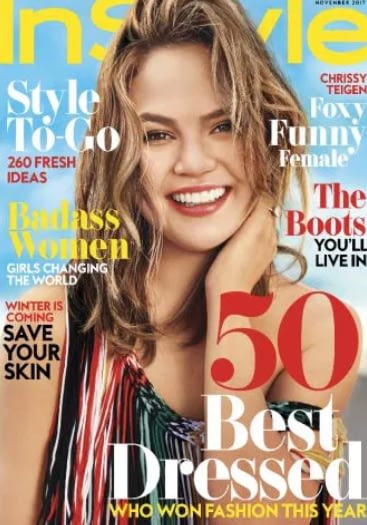 –Chrissy Teigen is on the cover of InStyle, in which she reveals that she and John Legend are looking to add one more child to their family via IVF.

-I’m going away for a week and I’m really starting to worry that I’m going to miss more of the SATC cast dragging each other. The latest is Kim Cattrall saying of Sarah Jessica Parker: “I don’t know what her issue is. I never have,” and says her relationship with her costars was “toxic.”

–Jimmy Kimmel continues to kill it with his monologues. In his latest, he says he has no time for those who claim it’s too soon to talk about gun legislation.

-When I read The Goldfinch, I was not picturing Ansel Elgort as Theo.

–Gabrielle Union spoke out about her fertility struggles, admitting ‘I’ve had 8 or 9 miscarriages.’

–Viola Davis and Larry Wilmore are teaming up for a new show on ABC called Black Don’t Crack, written by Insecure producer Regina Hicks. My god, that entire sentence is glorious!

-Add Brooke Shields to the list of women with creepy Trump stories. She says he called her right after his divorce saying “I really think we should date because you’re America’s Sweetheart and I’m America’s Richest Man.”

–Sam Smith is dating the guy who played one of the jocks in 13 Reasons Why and I love it so much.

–Jenny Slate may join Michelle Williams and Tom Hardy in the superhero flick, Venom.  This thing just gets better and better.

-The Real Housewives have a bad rep, but Bethany Frankel chartered four planes filled with supplies and EMT and sent them to Puerto Rico.

-There’s lots of talk about ABC’s new shows getting soft ratings last night, but The Mayor was up against This Is Us and still managed to  nearly double its timeslot comedy competition and tied CBS’s Bull among A18-49 at 9:30 p.m, while retaining 80% of  its lead-in.

-Here’s the first U.S. trailer for B.P.M., which dramatizes AIDS activism in early 1990s Paris. This got raves at Cannes and TIFF.

-Is it weird that I’m disappointed that Kate Winslet is working with James Cameron again? Cause I kinda am.

-It doesn’t help that I’m already disappointed in her for doing Woody Allen’s Wonder Wheel, which just dropped its first trailer.