-On The Late Show With Stephen Colbert Wednesday night, Colbert and Nick Kroll shared  awkward pictures of themselves with the hashtag #PuberMe, with a call to action for other celebs to follow suit. And now the interwebs is being flooded with mortifying photos of stars as teens. It’s awesome!

-Speaking of Puerto Rico relief, Beyonce is on the Mi Gente remix and is donating all proceeds to the cause.

-I didn’t even know that Idris Elba and Liam Gallagher were feuding over a hat but I’m glad they’ve managed to put it behind them.

-Meanwhile, Idris says he auditioned to play Gaston in Beauty and the Beast. I can’t even being to imagine that…

-Speaking of things I can’t imagine but would still like to see, Elizabeth Banks is directing a Charlie’s Angels reboot and in the running to star are Lupita Nyong’o(!) and Kristen Stewart(!!).

–Jake Gyllenhaal admits he’s all for being set up on dates. Get on it, ladies!

–Azealia Banks DM’d an apology to Nicki Minaj — but then posted it which seems like the opposite point of DMs.

–Kim Cattrall says the only “demand” she ever made about Sex And The City 3 was to never do another one.  I love her more and more every day.

–Jim Carrey is alleging extortion and blaming his former girlfriend’s mother and lawyer for her death.

-This week’s The Good Place might have been my favourite half-hour of TV all year. Even better, one of the show’s writers shared all of her pitches for the episode’s restaurant names, and they are hilarious!

–Mulder and Scully are swapping places in the first X-Files Season 11 photos.

-Here’s a roundup of all the critics gushing about the new Blade Runner movie. I can’t believe I’m going to have to sit through another 2-1/2 hour film…

–Jimmy Fallon played a weeping sound guy on the set of This Is Us. (“You’re the reason Dad died” made me laugh.)

Just when you thought… pic.twitter.com/SbtYChwiEj

-Damn: Julia Louis-Dreyfus revealed that she’s fighting a breast cancer diagnosis, which she found out about the day after her Emmy win.

–Kate McKinnon is on the cover of the November issue of Vanity Fair, in which she remains admirably tight-lipped about her personal life. I hate hate hate the cover image, but the inside shots are beautiful.

–Rihanna has been taking to Twitter on a regular basis over the past week asking Trump what his administration is doing to relieve the suffering in Puerto Rico. She amped up her message yesterday, telling him “Don’t let your people die like this.”

-This video of a toddler caught sneaking popcorn from Prince Harry during Toronto’s Invictus Games makes me very melt-y.

–Harry was also a surprise guest at a WE Day event in TO.

-If Kim Cattrall being a diva is preventing a third Sex in the City movie from happening, we all need to send her a fruit basket.

–Kim Kardashian confirmed that she and Kanye are expecting in a preview for the upcoming season of Keeping Up With the Kardashians.

-Netflix plans to invest at least $400 million in Canadian production in the next five years — though it might not be great news for Canadians.

-It’s been a rough week. I just don’t think I have it in me to read a whole story about Idris Elba falling in love with his new girlfriend if that girlfriend isn’t me…

-Disney may have forced ABC to renew Agents of Shield for movie synergy reasons.

-Speaking of ABC’s superhero shows, the reviews of Inhumans are hilariously *brutal*. Variety says “it makes Iron Fist look like Citizen Kane by comparison,” while Sepinwall says “Inhumans is Marvel’s version of “fetch.” Hopefully this awful TV show means they stop trying to make it happen.” The same showrunner also did Iron Fist. How does he get to fail twice, but the Agent Carter showrunners still don’t have a new show lined up?!

–Natalie Morales’ statement about those upshot photos is worth a read. 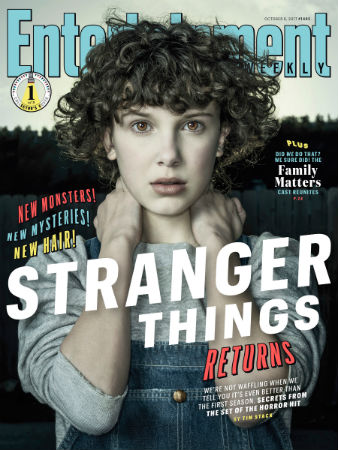 -I keep forgetting that Stranger Things returns in a few weeks. According to the new EW cover story, the new season will follow several disparate stories that intertwine but all roads eventually lead to the “shadow monster.” The Duffer Brothers are also insisting we call it Stranger Things 2 because they think of it as a movie sequel. They know they work in TV now, right?

-This is nice: Pitbull is providing his own private plane to help cancer patients get treatment after Hurricane Maria.

-Scroll down to the end of this article to see some awesome footage of Jane Fonda shutting Megyn Kelly down.

–Conan tried to invent his own ‘Carpool Karoake’-type segment with Tom Cruise as the first guest and it got real uncomfortable, real fast.

-Also, Tom shut down those rumours that he wore a fake butt in Valkyrie.

-I was getting a little worried about the lack of buzz for Denis Villeneuve‘s Blade Runner 2049 but they started screening the film for critics and the initial response is pretty damn glowing.

-I haven’t had a chance to watch the This Is Us premiere yet, but everyone else seemed to. It delivered its biggest ratings ever.

-Holy shit: Michelle Williams is in talks to star in Venom opposite Tom Hardy. That’s… unexpected.

–Kate Winslet and Leonardo DiCaprio are just trolling us at this point, right?

-If Justin Timberlake gets invited to perform at the Super Bowl I will angry-scream into a pillow for days.

-It’s amazing what winning an Emmy can do. Hulu is playing with the big boys now, scoring 30 Rock and Parenthood for their library in a massive deal with NBC.

–John Legend fights for new home for the TV show Underground in a new op-ed.

-Looks like Chappaquiddick is getting an awards-qualifying release date, premiering the same weekend as I, Tonya and The Shape of Water.