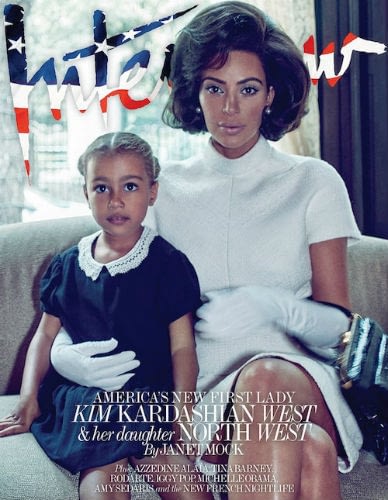 –Kim Kardashian‘s Interview cover is so weird — and not just because she’s posing as a First Lady. Why does she look so dead-eyed? Why is her eyeline different than her kid’s? Why is her kid even there?

-Oof, Taylor Swift’s “Look What You Made Me Do” video, which premiered last night at the VMAs, is so, so  bad. I didn’t mind most of it (yes, she’s borrowing from a lot of different people, including Beyonce, but at least it’s pretty). But then came the last 10 seconds. Are you kidding me? That’s not meta-commentary; that’s just commentary. That’s not subtext; it’s just text. There’s nothing sly or coy or clever about just parroting what people say about you. Why is she so scared to go full villain?

-Another low point of the VMAs was Lorde‘s performance. I love that little weirdo and I think her new album is one of the best of the year, but what was that? If she was too sick to sing than she shouldn’t have performed.

-At least Pink‘s performance and speech were great.

-I really like this thread about how Game of Thrones screwed up Dany/Jon. I can’t really get behind them because of all the icky ancestry stuff, but the fact that the build up was so mishandled that we didn’t even get first kiss scene is pretty telling.

–Ed Skrein just dropped out of the Hellboy reboot following its whitewashing controversy, and his statement about it is amazing.  I hope he gets a ton of publicity (and subsequent job offers) for doing what major stars like Tilda Swinton, Scarlett Johansson, Jake Gylenhaal,Benedict Cumberbatch and Emma Stone would not.

-OITNB’s Jenji Kohan talks about all the sexism she faced in TV writers rooms and it’s pretty horrific.

-Paramount Network (is that a thing?) just unveiled the first Heathers promo, proving that very few actors can pull off classic lines like “f*** me gently with a chainsaw.”

–Liam Neeson puts a ruthless spin on Deep Throat in the new Mark Felt: The Man Who Brought Down the White House trailer.