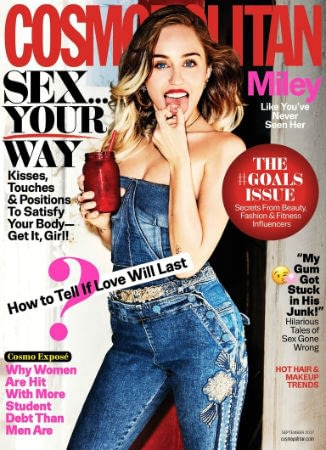 –Miley Cyrus looks very good on the cover of Cosmo, in which she talks about the benefits of having Dolly Parton as a godmother (“Having access to her closet!”) and her worst red carpet looks (“Pretty much 2008-2013. The Grammys were rough and tough for me. Yoikes!”). We also learned that Miley Cyrus is the type of person to use the word “yoikes.”

-We were gifted with another exceptional PR stroke from Jennifer Garner today. I mean, just look at those photos of her with Ben Affleck’s mom. They’re sharing sunglasses, laughing, leaning on each other and generally radiating genuine affection. Meanwhile, Ben is getting photographed in liquor stores by fans on his vacation with his new girlfriend in Maine. You know how people like Shonda Rhimes and Aaron Sorkin are hosting those Masterclass videos on screenwriting? I need Garner to host one on press manipulation and branding.

-Believe it or not, Jessica Biel is getting rave reviews for her new TV show, with Paste calling it her “Breaking Bad moment.” It debuts tonight  on the USA Network, and will air in Canada on Showcase later this fall.

–Jessica Williams told a great story on Colbert about how she and J.K. Rowling became friends after the author DM’d her.

-The FBI is now investigating that HBO hack, which could be brutal as it involved “seven times the amount of data stolen in the Sony hack.”

-In her Harper’s Bazaar UK cover story, Kristen Stewart talks about her sexuality and says she’s open to dating men in the future — which she explains with a grilled cheese metaphor. (“Some people aren’t like that. Some people know that they like grilled cheese and they’ll eat it every day for the rest of their lives. I want to try everything. If I have grilled cheese once I’m like, ‘That was cool, what’s next?'”)

–Billie Lourd‘s interview with Sarah Paulson in Town and Country is worth a read.

-On Watch What Happens Live, James Van Der Beek admitted he was surprised when Katie Holmes married Tom Cruise, said he still speaks to Busy Phillips and Joshua Jackson, and revealed he was glad Joey ended up with Pacey instead of Dawson. You and the rest of the world, bud.

-I love that Wet Hot American Summer is using “nose job” to explain away how Adam Scott took over Bradley Cooper‘s role. (Also, this clip gave me major Ben/Leslie feels.)

–Rihanna has finally announced an official launch date for Fenty Beauty, her cosmetics line that Sephora will carry.

-LucasFilm has brought in a new writer for Star Wars: Episode IX to revise the script from Colin Trevorrow and his writing partner, Derek Connolly. One has to wonder if this is the fallout from those terrible reviews of Trevorrow’s The Book Of Henry.

–Mindy Kaling was photographed between takes while filming the final season of The Mindy Project. I suck at bump watch but I still don’t see it.

–Vin Diesel is working on Miami Vice reboot for NBC and holy moly all those words are terrible.

-This is HILARIOUS: the Will & Grace revival will pretend the finale never happened. To recap: in the finale, Grace had a daughter with husband Leo (Harry Connick Jr.), Will was raising a son with husband Vincent (Bobby Cannavale), and Will and Grace were estranged — only to reunite 20 years later in a flash-forward when their kids started dating.

-I love that a reporter at today’s CW panel at the TCAs openly mocked Supergirl’s Mon-El. That…doesn’t happen there.

-The CW’s big superhero crossover will be a two-night affair this year instead of being spread out over four nights like usual. The only hint about the plot is “romance is in the air.” (If they squeeze the Olicity wedding into a crossover, Imma flip a table.)

-Also coming out of the CW panel, the network president recognized that maybe they’ve driven away their female audience too much.  Probably not a coincidence that last year, I saw showrunners/casts opening making fun of female viewers/shippers, and those shows’ ratings subsequently tanked.

-The CW day at TCA ended with an Everwood reunion panel in which the whole cast showed up and cried. God, I loved that show.

-Man, this article on Sharknado’s casting process is a fun read.

–John Boyega is defending Kathryn Bigelow against critics who think she wasn’t the person who should have brought Detroit to the big screen.

-Here’s the harrowing first trailer for Angelina Jolie’s Netflix drama First They Killed My Father, which is coming to TIFF.