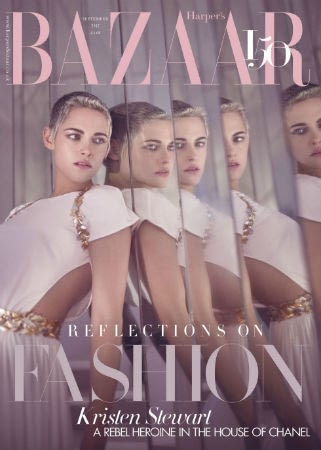 -The Sept covers continue to trickle in. The latest is Kristen Stewart on Harper’s Bazaar UK, which I love.  Chanel did right by her with this one.

-Wait, Jenny Slate is talking about her relationship with ex Chris Evans again? In the middle of a quote about how she’s trying not to overshare? I’m confused, guys.

–George and Amal Clooney have partnered with UNICEF to open schools for Syrian refugees because they’re good people.

-Will Smith says he adjusted his parenting style after Willow Smith shaved her head in protest because she didn’t want to continue her tour.

–Ryan Adams threw shade at The Strokes during a Twitter rant as if that would somehow make them both relevant again.

-Karma strike: R. Kelly has had to cancel his tour dates amidst those sex cult reports.

-TIFF announced a bunch of new films today, including James Franco‘s The Disaster Artist, Super Size Me 2, and the Grace Jones doc.

-Speaking of James Franco, he opened up about his battles with depression in a new interview in Out.

-Say what you will about Steven Soderbergh, but he never gives a bad soundbite when asked about the state of Hollywood.

–Mel Gibson is suing the producers of his dictionary movie.

-I feel like I’m doing a lot of ‘read between the lines’ work with Elizabeth Olsen’s comments about working with Jeremy Renner. I mean, she’s worked on multiple films with him now so she must like him. But there’s just something there…

-There doesn’t seem to be much positive buzz surrounding Idris Elba and Matthew McConaughey‘s The Dark Tower, and it’s not being helped by a new Variety report that suggests the production was plagued with problems because there were too many cooks the kitchen.

-I feel like Celine Dion is slowly, carefully introducing us to her new boyfriend and I’m here for it.

-I’m surprised that Amazon’s alt-history response to HBO’s Confederate is being met with such widespread love. Yes, a show about slaves being compensated sounds like a much, much better premise than HBO’s slavery fan fiction pitch, but it’s something that was conceived by a white guy (in this case, Amazon’s Roy Price) and given to two black executive producers. Can’t someone just adapt Alyssa Coles‘ An Extraordinary Union instead?

-This is a great, great feature on Lexi Alexander, director, Twitter crusader and all-around badass.

-I agree with THR’s take on how being a network president is now the worst job in TV. Think of the fall season. It’s already August and not one upcoming show seems to be creating buzz yet. Not. One.

-Speaking of networks, CBS sources say they offered Daniel Dae Kim a raise that would have put him within 2% of Hawaii Five-O’s leads. Shouldn’t have been that hard to offer him the final 2% then, no?

-Speaking of CBS, Erinn Hayes’ character will be killed off Kevin Can Wait to make room for Leah Remini. I don’t watch that show, but that seems extreme for a sitcom.

-Vulture has the trailer for Call Me By Your Name, which everyone fell in love with at Sundance. I’m not sure if this trailer really sold me, but Armie Hammer’s voice does things to me…

–Noomi Rapace plays not one, but seven people in the new trailer for Netflix’s What Happened to Monday.

-Watch Matt Damon, Julianne Moore, and Oscar Isaac tear up the neighborhood in this new trailer for Suburbicon.

-I didn’t really have much interest in David Fincher’s Mindhunter, the new Netflix series about getting into the heads of serial killers, but that was before I knew it lured Fringe’s Anna Torv back to TV. Dammit.