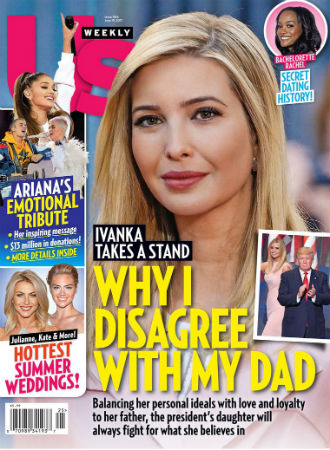 -The terrible new Us Weekly cover featuring Ivanka Trump is getting slammed all over the internet (deservedly so).

-We might not be getting very many more episodes of Game of Thrones in the last two seasons (and they are going to be way spaced apart), the episodes we do get are going to be supersized, with the season 7 finale clocking it at 81 minutes.

-You know that weird Jay Z commercial that confused everyone? Turns out Tidal’s mysterious 4:44 is a surprise film starring Mahershala Ali, Lupita Nyong’o, and Danny Glover.

-Ohhh…a new interview with the cast of You’re the Worst! I forgot that was coming back soon.

-THR’s comedy roundtable includes Judd Apatow, David Mandel, Kenya Barris, Gloria Calderon Kellett, Phoebe Waller-Bridge and Scott Silveri. Waller-Bridge talks about ruining her Downton Abbey audition by being inadvertently funny. “I went in thinking, ‘I’m going to give my best, sincere, heartbreaking performance.’ It was a really beautiful scene in a church; there’s a little clue … when I finished, they were like, ‘We had no idea she was so f—ing hilarious!'”

-Critics hate The Mummy and it could very well bomb here, but when you factor in the global box office it might turn out to be the biggest hit of Tom Cruise’s career.

-Fox cancelled 24: Legacy but the network is already talking with the producers of the franchise for a new take.

-The reviews for the latest season of Orange Is the New Black seem tepid at best.

-What exactly is Brad Pitt doing?!

-The trailers for Rough Night don’t do anything for me (I’m laughed way more at the trailer for Girl Trip), but I still want to support it because it’s the first R-rated studio comedy directed by a woman in 20 years.

-This is a great NYT profile on Aziz Ansari.

–Nicole Kidman was EVERYWHERE this week and she served up some looks.

–Bruce Willis talks the importance of underwear in a clip from action-comedy Once Upon a Time in Venice.

-Watch Sam Claflin’s flirting game get outmatched by Rachel Weisz in a clip from My Cousin Rachel.

–Naomi Watts plays a therapist who crosses all kinds of boundaries in the trailer for Netflix’s sexy new psychological thriller Gypsy.

Sandra Bullock Is People’s Most Beautiful