–Daenerys and Cersei are gearing up for their battle over the throne while Ayra heads to Winterfell in the new GoT trailer.

-Why oh why is Tom Cruise doing a Top Gun 2? This will not end well.

-The Billy Bush apology tour that no one asked for continues. Today, he told GMA that if he really believed Trump assaulted women he would have called the FBI. Uh huh.

-Wait, the talking dog show on ABC is … good? And it’s debut did well in the ratings? What?

–Mariah Carey and her backup dancer have reunited. Does this mean we have to learn his name?

–Kiefer Sutherland looks like he’s one step away from tackling another xmas tree.

-Between A-Rod and JLo, Nicole and Keith, and Blake and Gwen, everyone just needs to simmer down on the PDA this week…

–Pippa got married, but it’s sister Kate who landed on the cover of People‘s wedding edition. That’s gotta hurt.

-Crazy Ex-Girlfriend’s Rachel Bloom says she lost her virginity in college and “it really messed with my head.”

-Even Chris Pine can’t pull off something this hipstery.

–Vanity Fair’s Star Wars cover story is a great read, especially all the anecdotes about the late Carrie Fisher.

-The new season of Top of the Lake debuted at Cannes and the critics loved it. Elisabeth Moss is on fire right now! 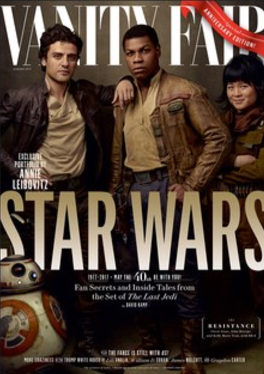 -All of the Vanity Fair Star Wars covers are great, but the one featuring John Boyega and Oscar Isaac is making the internet blow up. Finn is wearing Poe’s entire outfit from the Force Awakens — not just the jacket, but the belt and pants too. It’s like fanfiction come to life!

-I was grossed out that media outlets kept calling Beyoncé’s baby shower a “push party” until I realized that’s how she and Jay Z referred to it themselves. Be better, everyone.

-A Pirates 5 writer says Dead Men Tell No Tales had a female villain… until Johnny Depp made them change it. He just keeps getting dreamier and dreamier, huh?

-I didn’t see this one coming: Scarlett Johansson reportedly got cozy with Weekend Update’s Colin Jost at the SNL season finale after-party.

-During the terribleness that was last night, this story about Mr Rogers stood out as a little sliver of wonderfulness amongst the darkness.

-Meanwhile, Ariana Grande’s team is still assessing whether or not to continue her tour following the Manchester attack.

–Chrissy Teigen expressed a favourable opinion about Ed Sheeran on Twitter and got pulled into the squad wars.

–Katy Perry keeps flip-flopping about whether or not her new song is about Taylor Swift.

-Oh shit, Baywatch is only at 15% on Rotten Tomatoes.

-Twin Peaks returned to not-great ratings, but Showtime is saying lots of people signed up to their streaming site.

-Meanwhile, this is a good read on how incredibly low live TV ratings are the norm.

-CBS says Stephen Colbert had the most total viewers in late night for the TV season, beating Fallon’s Tonight Show.

-Critics are really hating ABC’s Dirty Dancing remake, which airs tomorrow. I was curious, but not after I found out it runs three(!) hours long.

–Cobie Smulders threatens a pharmacist for fertility drugs in the Friends From College trailer.

Rihanna looks like she scams rich white men and lupita is the computer smart best friend that helps plan the scans https://t.co/PhWs1xd3nj

-It started as a tweet, turned into a meme, and now it’s actually happening: Rihanna and Lupita Nyong’o will costar in a buddy movie directed by Ava DuVernay. The original tweeter better get a producer credit.

-This is tragic: Zack Synder has stepped away from the Justice League movie to due the recent suicide of his daughter. Joss Whedon will reportedly step in to finish the film. (She passed away in March, proving Hollywood knows how to keep its ish under wraps when it wants to.)

-Last night’s Billboard Music Awards was ruled by the divas, from Cher’s performance of “If I Could Turn Back Time” (my fave part of that clip is Ansel Elgot‘s enthusiastic singalong) to Celine Dion‘s performance of “My Heart Will Go On.” Other cute moments include Celine leading the backstage press in a Cher singalong,  Drake telling Celine: “You’re very iconic. We love you,” and Vanessa Hudgens giving  us her best Celine.

–Bobby Moynihan, Vanessa Bayer and Sasheer Zamata all announced that this weekend’s episode of SNL was their last.

-Speaking of the SNL finale, Katy Perry managed to alienate the black community and the LGBT community.

–Billy Bush broke his silence on the Trump fiasco in a new cover story. Let’s all just pretend he didn’t, k?

–Jessica Simpson was on Ellen and reminded us that she’s kinda kooky.

-I would really, really love to see Salma Hayek’s live-chat be flooded with questions about her shut down of Jessica Williams. Make it happen, interwebs!

-I don’t watch reality TV, but this Twitter headline got me clicking anyway: “The Bachelor(ette) has long been cruel to black women. It may now be our greatest hope”

-Yet another streaming service has launched — and this one has Jared Leto as its “Chief Creative Officer.” Well then…

–Nicki Minaj has been quietly sponsoring an Indian village for years because she’s kind of awesome.

-Critics are hating on the fifth Pirates of the Caribbean movie, but it’s still projected to make buckets of money.

–Krystal tries to get to the bottom of things and Keira is kidnapped in the final Orphan Black trailer.

-The trailer for The Hitman’s Bodyguard didn’t really do it for me when I first saw it, but if this is the poster, I may have to rethink my stance.