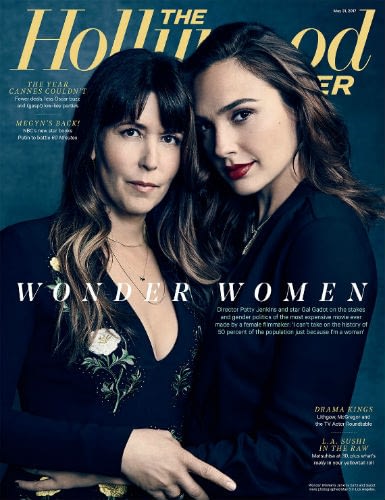 -This take is TRASH: the Hollywood Reporter’s cover story says Warner Bros is “gambling $150M” on Wonder Woman’s female director because her only prior big screen credit is the $8M Oscar-nominated, critically acclaimed Monster. Seriously? As Twitter was quick to point out, Hollywood handed the keys to the Jurassic franchise over to Colin Trevorow, who had only done the $750K Safety Not Guaranteed, which wasn’t nominated for shit and no one saw it. Or what about Josh Trank, who jumped from teeny tiny indie Chronicle to Fantastic Four? Same with Jordan Vogt-Roberts, Gareth Edwards, Jon Watts, Alan Taylor, David Yates, James Gunn, etc. Hollywood throws money at white men who barely have a YouTube channel all the time. But this is a gamble that requires hand-wringing? Nah, son.

-Meanwhile, This Wonder Woman featurette is 13 minutes of pure joy.

-Felicity reunion alert! Keri Russell and Scott Speedman appeared on Jimmy Kimmel Live together and it made my heart grow three sizes. The part where he talks about how they dated and he was “such a disaster of a boyfriend”? Kill me.

-Oh god, did Robin Wright take Sean Penn back? Why????

– Jennifer Garner is on the cover of People and it confused everyone because it’s kind of a nothing article. It turns out she had no involvement in the story at all. She took to Facebook to say “This isn’t a tragedy by any measure, but it does affect me and my family and so, before my mom’s garden club lights up her phone, I wanted to set the record straight: I did not pose for this cover. I did not participate in or authorize this article. While we are here, for what it’s worth: I have three wonderful kids and my family is complete.” A celebrity calling out People like this? Yikes.

–Arcade Fire is going full glam-era Bowie with their new track, which is impossible to link to because it keeps getting pulled from YouTube.

-NBC changed its mind and won’t move This Is Us to Thursday nights after all. Why mess with the only genuine hit of the year?

–Kathy Griffin apologized for her Trump decapitation photo, saying “I am sorry. I went too far. I was wrong.” CNN has fired her anyway.

–Drake scored a huge victory in his sampling lawsuit with a fair use argument about “real music.”

-Less of a victory: JLo just dismissed him as a booty call.

-67 million of Katy Perry‘s followers may be fake.

-Vulture is asking the right questions in this piece wondering how the hell Johnny Depp keeps getting cast in movies.

–Ed Westwick has no interest in a Gossip Girl revival. “It’s played out, man. It’s done.”

-This past weekend was the worst Memorial Day weekend at the box office since 1999.

-Wow, this seems like a big career misstep for Hailee Steinfeld.

-You get two James Francos for the price of one in this trailer for David Simon‘s new show The Deuce.

–Idris Elba and Kate Winslet are strangers trying to survive after a plane crash leaves them stranded in The Mountain Between Us trailer.