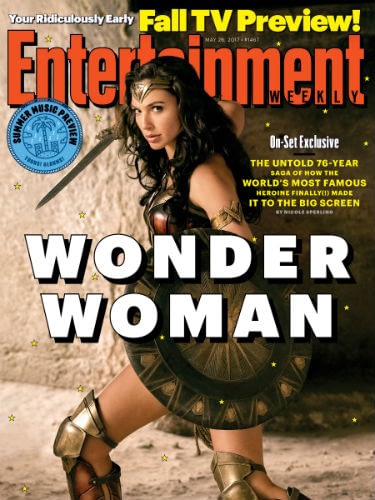 -Wonder Woman, which got its own EW cover this week, is getting good early reviews! (I already bought 10 tickets for my crew so I was seeing it either way, but this is a relief.)

-Parent of twins Julia Roberts says George and Amal Clooney “don’t need advice from me or anybody else” — and then she proceeded to give some.

–Vicky Cornell, the wife of Chris Cornell, issued a statement today implying his suicide may have been the result of taking too much anxiety medication.

–Prince Harry and Meghan Markle are not even engaged yet, but they already have permission to wed at Westminster Abbey. Being a royal is weird, yo.

–Amy Schumer has split from Ben Hanisch and says she prefers to date “nice guys,” so I’m guessing it wasn’t exactly amicable.

–Steve Harvey‘s ex-wife is suing him for $60 million for child endangerment, torture, conspiracy against rights, intentional infliction of emotional distress, breach of contract, and “soul murder,” which is defined in the lawsuit as “a combination of torture, deprivation, and brainwashing.”

–Seth Rogen‘s tweet about Justin Timberlake made me laugh (and yeah, his wife really does look like Jessica Biel).

-This is terrifying: Amber Rose slept while intruder broke into her home and stayed for hours.

–Katy Perry pranked unsuspecting visitors to New York’s Whitney Museum. If this happened to me, she would catch these hands.

-The CW revealed their new lineup, and they’re moving Riverdale to Wednesday, Arrow to Thursday (against This is Us — ouch!), and Jane the Virgin to Friday. Also, Black Lightning won’t be part of the shared universe like their other DC shows (because heaven forbid CW’s first black superhero show gets to be part of the crossovers.)

-I don’t know much about One Direction except that their fandom is super intense and will spend lots of money on them.  So why did Liam Payne think it would be a good idea to diss his former band on his first single?

-Orange Is The New Black fans, here’s a skit where Taystee and Poussey meet in Tucker’s bar from Black Mirror’s “San Junipero” episode.

-This is a great piece on how Master Of None captures the loneliness of being constantly connected. The scene that stuck out to me in the new season was when he and his buddy were having the dinner at the most famous restaurant in Italy and they both stopped mid-meal to text.

-Also, chef Massimo Bottura, who was featured in Netflix’s Chef’s Table, was the one who pitched Aziz Ansari on shooting in Michelin-starred Osteria Francescana, not the other way around.

–Olivia Wilde was at Times Square yesterday when all hell broke loose.

-P*ssy Posse founder Leonardo DiCaprio has broken up with yet another model.

-The trailer for CBS’ Star Trek show is so wonderfully diverse and female-powered that I might actually watch it.

-Speaking of CBS shows, Mom has made the almost-unheard-of-in-Hollywood decision to donate the $250,000 budget earmarked for Emmy campaigning to Planned Parenthood. I don’t watch it, but this makes me want them to win the Emmy.

-I kind of love this Buzzfeed article about a writer who found her voice by writing Justin Timberlake fanfic. Who knew that was even a thing?

-CBC has unveiled the release date and a trailer for Alias Grace. So much Atwood on our TVs! I love it!