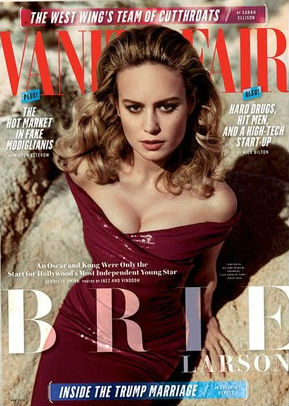 –Brie Larson is on the new cover of Vanity Fair, talking about her years of scraping by, the awards-season madness, and how having celeb friends like Jennifer Lawrence and Emma Stone (who she was introduced to by Woody Harrelson) keeps her sane.

–Demi Lovato just got a big new lion tattoo that she is probably never, ever going to regret.

–Anna Faris jumped to Chris Pratt‘s defense on Twitter, saying his comments about not seeing himself onscreen are keeping him “up at night” before adding “Chris is truly the best person I know-and he will be annoyed with me for tweeting this.”

–Samantha Bee was interviewed by Lena Dunham ahead of the “Not the White House Correspondents’ Dinner.” On pushing the boundaries on her talk show, Bee said “We were nervous at first, but we were like, ‘Oh, f— it, we’re too old to worry. If it gets canceled, we’ll say ‘c—’ on television, and we’ll go be farmers.'”

–Serena Williams says her pregnancy announcement was a social media slip-up. She was taking photos for herself of her progress and she pressed “the wrong button.”

-This is a good peek into Bill Cosby‘s legal team’s efforts to counter public perception. The damage control train has already left the station, with his daughter penning a letter claiming he’s the victim of a media witch hunt.

–Johnny Depp spoke out about his dispute with his former business managers, who claim the actor’s troubles actually stem from his own overspending. Said Depp: “It’s my money. If I want to buy 15,000 cotton balls a day, it’s my thing.”

–Blake Lively wore an absurd outfit last night. I wonder if anyone was allowed to ask her about it?

-Newly single Jesse Williams might be spending time with Minka Kelly, who is quickly becoming more famous for her dating life than her acting, which is unfortunate.

–Alexis Bledel is getting great reviews as Ofglen in The Handmaid’s Tale, which is surprising because as much as I like her, her acting skills have never really bowled me over.

-Speaking of The Handmaid’s Tale, here’s a good refresher for those of us who haven’t read it since high school.

-There was a That Thing You Do reunion and it looked delightful.

–Paris Jackson looks so much like Madonna in this Vanity Fair pic that it’s creeping me out a bit.

-This story about the late Jonathan Demme at the TIFF screening of Moonlight is lovely.

-I’m glad someone wrote about this because I’ve been thinking the same thing for weeks: Where the hell is the Wonder Woman promotion?? I feel like I’ve seen way more for the Justice League, and that comes out in November. WW is out in six weeks and it’s been crickets on the marketing front.

-I don’t watch Big Brother, but this is a really good read about how the 2008 winner and a castmate ended up in jail after using the winnings to start selling drugs.

–George Clooney travels through some of Hollywood’s most iconic films in his new Nespresso campaign. I’m probably not supposed to be cringing this much, right?