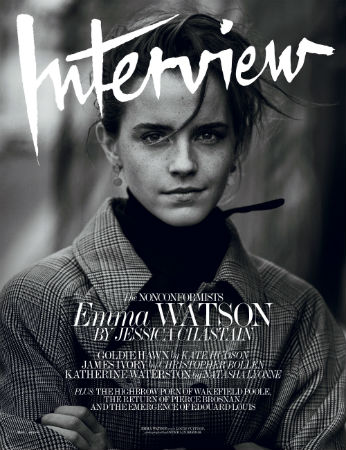 –Jessica Chastain chats with Emma Watson in the new issue of Interview, in which the former Harry Potter star reveals she’s calling from a bath (“I didn’t want you to hear swishing water and be like, ‘Uh, what are you doing?'”), and  talks about protecting her privacy (“When I step into a character, people have to be able to suspend their disbelief; they have to be able to divorce me from that girl. And not having everyone know every single intimate detail of my entire life is part of me trying to protect my ability to do my job well”).

–Madonna doesn’t seem happy with those rumours of a new biopic focused on the early 80s. clapping back by saying “Only I can tell my story.”

-Meanwhile, Taye Diggs is wearing a cone bra and doing “Vogue” on this week’s Lip Sync Battle, which just got another shot on my DVR.

-This might be the bestest story to ever be: Tom Hardy made a citizen’s arrest after pursuing someone who allegedly stole a moped through gardens in London, before grabbing the man and declaring: “I CAUGHT THE C**T!” Guy Ritchie has undoubtedly already bought the movie rights…

–Vin Diesel is still insisting his F8 kiss was good, despite video evidence and Charlize Theron’s claims to the contrary.

–Scott Baio continues to be trash, backtracking on his claims that Erin Moran‘s death was due to drug use after it came out that she had stage 4 cancer (notice he doesn’t actually apologize?) and then denying what he said — even though it’s on tape.

–Abigail Breslin took to social media to explain why she didn’t report her rape.

–Mila Kunis made her mom cry by re-doing her condo. Her parents are adorable!

-NBC has pretty much cancelled Powerless. I’m still stumped over why they reportedly changed it so much from the version everyone saw and loved at Comic Con.

-Now Ava Duvernay and Issa Rae have thrown their hats in the ring for the Lupita Nyong’o and Rihanna movie. MAKE THIS HAPPEN, HOLLYWOOD!

-Oh goodie. Now DC is plotting its own streaming service for its TV shows. Remember when we all thought cord-cutting would be cheaper?

-Welp. We’re at about a 50-50 chance of a TV and movie writers walkout after guild members voted for strike authorization with 96% support. A walkout would start May 2 if a new deal is not in place by then. Seems like health care is the big sticking point. The NYT has a good recap of the whats and whys. If it happens, expect late-night shows to stop immediately, scripted shows coming back in fall to be delayed, or have shortened and/or hurriedly written seasons, and streaming sites to get even more popular.

–Colin Firth is back from the dead in the new Kingsman: The Golden Circle trailer. Halle Berry and Channing Tatum tag along this time.