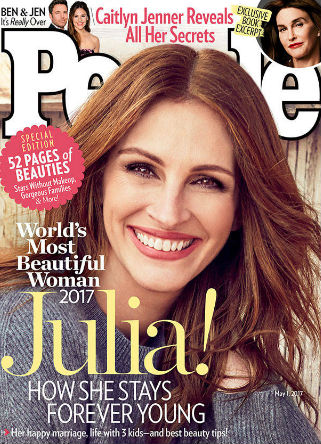 –Julia Roberts was named People’s Most Beautiful? JULIA ROBERTS? I mean, what a safe, uninspired choice. And why? These things are always connected to a PR push. What is she promoting? It’s too early for a Wonder push. The Smurfs movie? I’m so confused.

-Yes, Nina Dobrev looks lovely with no makeup but try that when you’re over 30 and then you’ll impress me.

–Serena Williams and Alexis Ohanian just announced they are expecting a child. That means she was pregnant when she won her 23rd grand slam tournament. Queen!

-This is a fascinating feature on the revamped website The Dirty and gossip coverage’s wild west days.

-Speaking of gossip culture, I really liked this piece on the decline of Us Weekly and People. It goes hand-in-hand with this podcast I just listened to about Us’ heyday.

–Anne Hathaway reveals she didn’t trust her One Day director, and she worries it’s because she was a woman. “I’m so scared that I treated her with internalized misogyny. I’m scared that I didn’t give her everything that she needed or. . . I was resisting her on some level.”

–Chris Pratt admits he was “caught off guard” by the Passengers criticism but he thinks the movie will hold up. Yeah…no.

-Here’s the first trailer  for Netflix’s new true crime series The Keepers, which everyone is calling the next Making A Murderer.

-The teen who broke down how every single Chainsmokerss song is written is my new hero.

–Cara Delevingne‘s Rimmel mascara ad was pulled in the UK for “misleading” consumers because the ad didn’t say she “had also been given individual lash inserts to fill in gaps and that some lashes had been re-drawn in post-production.”

–Janet Jackson‘s creative director says Janet has no interest in her estranged husband’s billions. So there.

-This profile on Javier Bardem is unintentionally funny. “‘Very deep’ appears to be Bardem’s default setting. He prefers characters who are dying, or tormented, or simply scary as shit.”

–Matt Damon was dragged off a United flight courtesy of nemesis Jimmy Kimmel in this new skit.

–Oprah Winfrey, the Obamas, Tom Hanks, and Bruce Springsteen all walk onto a boat…and none of them will tell us what happened next.

-The new dishy book about Prince Charles include tidbits about how Camilla and her first husband were forced into marriage when their parents published an engagement announcement without their knowledge, and how Diana and Charles got married because he misinterpreted a letter from his father.

–Keira Knightley had to do the new Pirates movie? Poor woman.

-This Twitter thread about what it’s like to be a woman in a TV writers room is both sad and not surprising.

-Me: I can’t handle any more superhero shows. Also me: A show about teen superheroes? Yes, please!

-Kimmy is going to college and Tituss is going full Beyonce in this new trailer for Kimmy Schmidt season three.