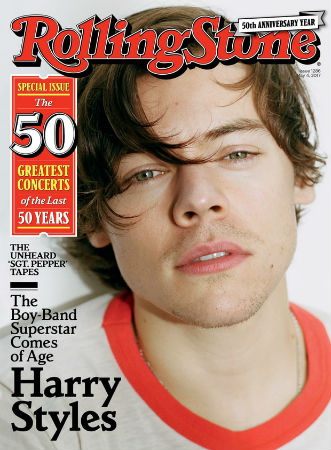 -One Direction’s Harry Styles was interviewed by Cameron Crowe for Rolling Stone’s new cover story and it’s surprisingly great considering how he usually seems to mess with his fandom. He praises teen girls’ pure unironic enjoyment of things (“Who’s to say that young girls who like pop music – short for popular, right? – have worse musical taste than a 30-year-old hipster guy?…If they like you, they’re there. They don’t act ‘too cool.'”) and ridicules the tortured artist stereotype (“There’s nothing worse than an inauthentic tortured person. ‘They took my allowance away, so I did heroin.’ It’s like – that’s not how it works.”)

-Alright, Blake Lively gets a pass for being on the Variety cover because she’s promoting her work with the Child Rescue Coalition (which is promoting technology that flags the IP addresses of people who share and download sexually explicit images of minors).

–Blake also revealed that she loves to do the dance from The OA.

-Speaking of the Variety covers, Jessica Chastain talks about how she’s fighting for Planned Parenthood.

–Meghan Markle will make another step towards being a bona fide royal by attending Pippa Middleton’s wedding with Prince Harry.

-Speaking of the royal fam, Lady Gaga and Prince William teamed up on Facetime to discuss mental health.

-The woman who burglarized Drake’s home was very thirsty. Like, in the literal sense.

-A select few critics got to see Guardians of the Galaxy 2 at yesterday’s Marvel Open House meet and greet with execs and initial reactions are gushing, calling it “MCU at its very best” and “funny, action packed, emotional, and tons of surprises.”

-This was my favourite part of the Pretty Little Liars oral history: “I created a little box that hung on the wall. If you asked a logic question [about the show’s plot], you had to put a dollar in it.” Well, at least they’re honest about it.

–Tracy Morgan still calls his 30 Rock costar Jack McBrayer by his character’s name, Kenneth, which might be the most Tracy Morgan-ist thing I’ve ever heard.

-This is an interesting take on how celebs like Justin Bieber, Father John Misty, and Zayn gain control from trolling their fans.

–Don Cheadle rapping Kendrick Lamar in the “DNA” video is even better than it sounds.

-According to Netflix, its users have watched over 500 million hours of Adam Sandler movies. Humanity is doomed.

–Aubrey Plaza, Alison Brie, and Kate Micucci are nuns behaving badly in the red-band trailer for The Little Hours.

Issa Rae and Michael B Jordan Talk Breaking Down Barriers

Anna Kendrick Poses In Bikini, Claims No One Hits On Her

Arrow Bows Out with EW Cover