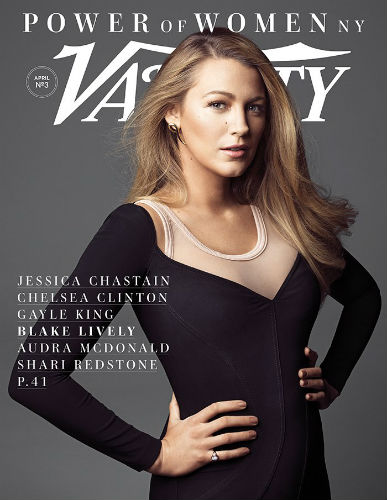 -Variety is launching its Power of Women NY issue tomorrow, and the covers feature Chelsea Clinton, Shari Redstone, Audra McDonald, Jessica Chastain, Gayle King and…Blake Lively? One of these things is not like the other.

-Despite those reconciliation rumours, Ben Affleck and Jennifer Garner have officially filed for divorce two years after splitting. Once again, their timing was impeccable.

–Amy Poehler, Sarah Silverman and Aziz Ansari reflect on the legacy of Harris Wittels in this heartbreaking article.

–Robert Downey Jr. looks like an existentially confused Easter bunny and I’m here for it.

-I love this video of Reese Witherspoon calling out paps for their crappy driving. The arm pat at the end with the “you know better; I’ve known you forever, come on!” is peak Reese.

-Speaking of paps, this is an interesting look at how they get shots on closed movie sets.

-Brace yourself: Scarlett Johansson said that running for political office “could be interesting.”

–Keri Russell and Matthew Rhys continue to be my favourite celebrity couple because of stuff like this.

-EW is ranking the shows in danger of being cancelled and I’m really hoping they’re wrong about Pitch.

–Lady Gaga and Bradley Cooper are filming A Star Is Born scenes using the Coachella stages this week. (Is he wearing a fake nose?)

–Drew Barrymore remembers the way Coachella used to be. I miss those days.

-I don’t go to Coachella anymore (’cause I’m too old for that shit) but I was visiting my brother and we ended up catching a lot of the live-stream. Despite Radiohead’s technical difficulties at the beginning, the last five songs (including Creep!) were perfection. I also really dug Glass Animals, Two Door Cinema Club, The Head and the Heart, Phantogram, Bon Iver, Little Dragon, Big Gigantic and Schoolboy Q.

-Coachella is always lit when it comes to spotting new celebrity couples. Chris Pine and Sofia Boutella were photographed holding hands, while Orlando Bloom made out with a model while his reported new girlfriend Nina Dobrev looked on. (Sigh. I love her but her relationship choices give me heartburn…)

-This takedown of Vin Diesel is making my Monday more tolerable.

-I finally finished 13 Reasons Why and I’m not sure that the ending lived up to the hype, especially because it became increasingly difficult to understand why the kids were covering it up.

-Good for Prince Harry for sharing his struggles and helping to normalize mental health treatment.

-Dirty Dancing: Havana Nights was not only a terrible movie, it was a terrible set to work on.

-Wait, is Shonda Rhimes creating her own Lenny-ish site? Sign me up!

–Tyrese Gibson has apologized for those “horrible” comments about “promiscuous women”… this time.

-This is an interesting take about why it’s not always great when Netflix buys a movie you really want to see. I don’t disagree that they bury their new releases. There’s a new Joe Swanberg/Jake Johnson movie called Win It All that I loved, but it just hit Netflix and I’ve heard nothing about it. Like, crickets.

–Michelle Pfeiffer is stepping back into the spotlight and I can’t wait.

-The teaser for Star Wars: The Last Jedi is very pretty.