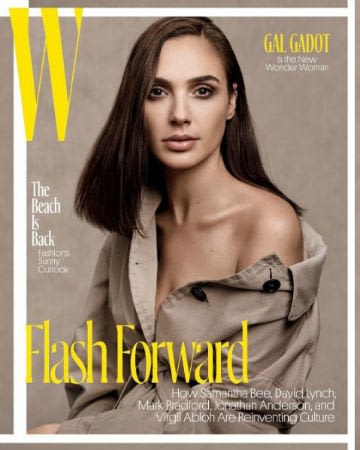 –Gal Gadot‘s hair looks oddly cropped on the cover of W, no? In the interview, she talks about listening to Beyoncé before her Wonder Woman audition, and finding out she was pregnant while shooting Justice League.

-I haven’t watched Survivor in years but it’s back in the news because of last night’s episode, which featured a contestant brutally outing a few team member as transgendered during the tribal council.  The outed contestant wrote a moving essay about the experience, while the outee profusely apologized and gave an interview saying “If he wants to shoot me, I’ll hand him the gun. I deserve this.” Jeff Probst was pissed, but no one seems to be putting any blame on CBS for deciding to air it.

–Jenna Elfman took part in a Reddit AMA to promote her new show Imaginary Mary but all anyone wanted to ask her about was Scientology.

-The best thing about both The Leftovers and Fargo returning this month is that we’re swimming in fantastic Carrie Coon profiles.

-Meanwhile, here’s a good refresher on where the last season of The Leftovers left us.

-Lost and Leftovers creator Damon Lindelof explains why he thinks bingeing TV shows is bad and why viewers deserve a break between episodes. I don’t disagree.

-Are Jamie Foxx and Katie Holmes getting ready to going public? Us Weekly’s magic 8-ball points to “yes.”

-In the latest issue of THR, Stephen Colbert dishes on his angst and anger over why the election felt “like somebody dying.”

–Chris Evans proves himself to be even more of a unicorn than we assumed by revealing that he’s never had a bad breakup.

-The Cannes lineup has been announced, and Nicole Kidman will star in not one, but four films there.

-Not surprising but still happy-making: the reviews for The Handmaid’s Tale are glowing.

-Did you like Big Little Lies? Then you’ll be happy to hear that there are four(!) more Liane Moriarty adaptations in the works.

-Orphan Black fights for the future in this trailer for the final season.

-I don’t disagree with this article about how Lena Dunham is a great actress on Girls. This scene from a few weeks ago took my breath way.

–Britt Robertson builds a fashion empire in the trailer for the Netflix series Girlboss.

–Elle Fanning plays a transitioning teen in the trailer for the controversial 3 Generations.