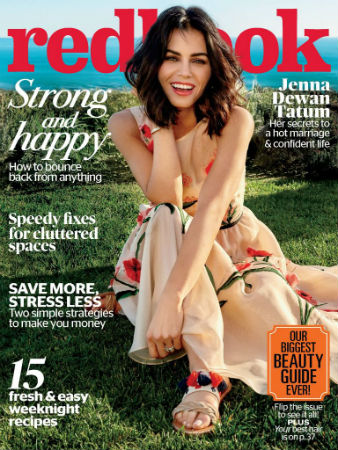 –Jenna Dewan-Tatum opens up about her marriage to Channing Tatum in her new Redbook interview, talking about trying to find time to be together despite their schedules and bristling at questions about how she keeps the relationship fresh (“I hate that question. I’m like, ‘No. Why is it for your man? I do things to keep it fresh for myself.'”)

–Charlize Theron would like Vin Diesel to stop telling everyone that she loved their onscreen kiss. “I just don’t get it. He’s literally going around saying that I had the best time of my life” she said before adding “I like a little more movement in my men.”

-A new Lorde album means new Lorde interviews, which are always a hoot. In her NYT profile, she talks about her love for Katy Perry’s “Teenage Dream,” saying “There’s this sadness about it, where you feel young listening to it, but you feel impermanence at the same time…There’s something holy about it.”

-Speaking of Katy, Orlando Bloom insists he and Katy Perry are still friends but added “it’s between us” so maybe stop asking.

–Shia LaBeouf will spend a month alone in a Finland cabin for an art project. Do you think that sometimes James Franco reads this stuff and then needs a hug?

–Jaden Smith had to cut his hair for a new role — so he let dad Will do the honours.

-If you announce that a big guest star is returning for your season finale, and then said guest star vehemently denies in on Twitter, is it still happening? Welcome to the mess that is Arrow bts.

–Lea Michele admits that she watches old episodes of Glee alone. Of course she does.

–Tig Notaro has spoken out about that SNL skit featuring Louis C.K. that bears a striking resemblance to her own.

–Nelly Furtado split from her husband after eight years of marriage — and she managed to keep it under wraps for almost a year.

–Angelina Jolie reportedly made an offer on Cecil B. DeMille’s historic Hollywood home.

-In her new Women’s Health cover story, Vanessa Hudgens breaks down how she dropped 10 lbs in only a month. That seems like too much.

–Sylvester Stallone is suing Warner Bros for fraud and “dishonesty” surrounding the profits of Demolition Man. Major stars don’t just sue movie studios so this must have been a long and messy fight.

-You can watch the first few minutes of the season premiere of Orange Is The New Black, which picks up right where season 4 left off.

-The Path has been renewed for season 3. I’m happy for Aaron Paul, but I don’t know a single soul who’s still watching that show.

-The trailer for Thor: Raganarok, which debuted on Monday, was viewed 127.6 million times in its first 24 hours, making it Disney’s most-viewed trailer ever.

–Kathryn Hahn tries to get several degrees closer to Kevin Bacon in the trailer for the new show I Love Dick.