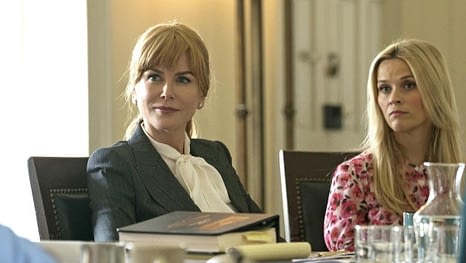 -Because Hollywood just can’t leave well enough alone, the author of Big Little Lies says HBO approached her to work on ideas for a second season.

-The internet is convinced Britney Spears and Justin Timberlake recorded a new song together.

-This Scandal oral history reveals that ABC originally wanted Connie Britton to play Olivia Pope, and that Kerry Washington and Tony Goldwyn had this “immediate electricity” (which I’m sure is provoking much snickering in the blind item circles).

-This is an interesting peek inside the WGA talks.

–Jemima Kirke and Dennis Quaid had a charming conversation about on-set boners.

–50 Cent punched a female fan in the chest at a concert, but then invited her twerk on stage so I guess all is forgiven?

–Cuba Gooding Jr. and Sarah Paulson sang show tunes together on a night out in the West Village. I guess they’re both over skirt-gate.

–Katy Perry and Ryan Phillippe aren’t dating, but they are exchanging cute tweets about the rumours.

-I enjoyed this take on how The Rock became our fave populist hero.

-This is a good read on how independent cinema is moving out of the art house and into every house thanks to Netflix and Amazon.

-I don’t watch Bates Motel but star Freddie Highmore directed last night’s episode and everyone loved it. In my head he’s still 12 so this is all very confusing…

–Charlize Theron beats a man to death with her stiletto in new Atomic Blonde promo. This feels like something they should have not given away in the trailer but I’ll take it.