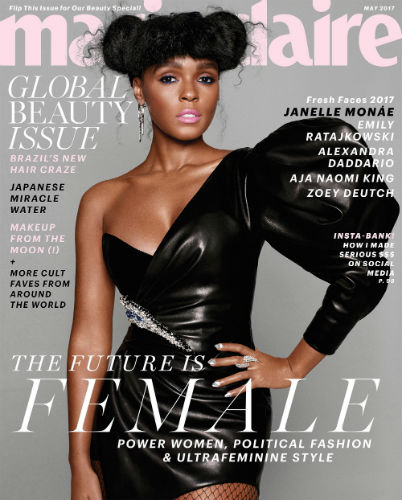 –Janelle Monáe (who looks amazeballs on the latest cover of Marie Claire) is endorsing a sex strike until all men are feminists. “People have to start respecting the vagina. Until every man is fighting for our rights, we should consider stopping having sex. I love men. But evil men? I will not tolerate that.”

–Ashton Kutcher says wife Mila Kunis “kicked his ass on character” when he tried to act like a hero for being a dad. “I thought I was awesome because I got up early and helped with the kids before she woke up and I let her sleep a little bit and then she’s like, ‘Well, now you’re gonna act tired? I do it every day.’ But it was a character moment, right? Because she’s right!”

-Just a couple of months after giving birth, Janet Jackson has split from her husband. According to reports, her prenuptial agreement guaranteed her $500 million if she stayed 5 years. She left 5 years, two months in.

–Ryan Phillippe took to Twitter to deny those rumours that he’s dating Katy Perry, saying “I barely know her” and added “please stop flying helicopters over my house. She is not there.”

–Blake Lively says she gave birth to ‘Let’s Get It On’ because Ryan Reynolds was DJing.

-A woman on Twitter was crowdfunding her beauty school tuition — until Chrissy Teigen paid the whole thing.

–Goldie Hawn has a Vegas road-trip story to rival The Hangover.

–Denzel Washington brings a jazz legend back to life in the trailer for the doc Chasing Trane.

–Kylie Jenner is getting her own show? When with this national nightmare end?!

-I always forget that Rose Leslie and Kit Harrington are still together, and it’s lovely to be reminded.

–Aisha Tyler‘s directorial debut just got its first trailer. Hey, I kickstarted this!

-The Thor: Ragnarok teaser trailer is good but I’m going to need 1000% more Tessa Thompson as Valkyrie and Idris Elba as Heimdall. (The fact that this is directed by Taika Waititi has me so intrigued though. Have you seen What We Do In the Shadows? Or Boy? Hilarious.)