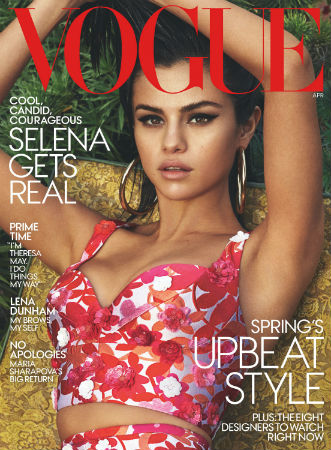 -In Vogue’s April issue, Selena Gomez talks about being famous, her 5-days-a-week therapy regime, giving up Instagram and flying under the radar.   The story is ok (though it leans heavily into positioning her as fragile) but I swear, I don’t even recognize her in some of these photos. Especially this one. Is that really her?! I blame the contouring makeup.

–Matthew Perry told Jimmy Kimmel he beat up former classmate Justin Trudeau in the fifth grade because he was jealous that Justin was “excelling in a sport.”

–Melissa George has given an emotional interview about a violent incident with her ex and her attempts to flee him in Paris.

-Whoa. I had no idea the kid who played Ben on Friends is the same guy playing Jughead on Riverdale.

-Speaking of famous ladies doing good, Angelina Jolie met with the Archbishop of Canterbury to talk about sexual violence, the refugee crisis and South Sudan.

-Girls’ star Alex Karpovsky doubts Ray and Shoshanna will get back together at the end of the series. THEN WHAT’S THE POINT?!

-The final four SNL eps of the season will be broadcast live across all four time zones in the US for the first time in history.

-Who has the worst American accent on TV? There are a lot of contenders.

-These are some good suggestions for This Is Us’ next season.

–Roseanne’s up for a Roseanne reunion, which Norm MacDonald wants to write. I want this.

–Samantha Bee wishes everyone in the “resistance” would actually, you know, go vote.

Rihanna Covers Up for Glamour