-Does Angelina Jolie even need a publicist? Her very selective outlet choices this week suggests no — even though there is a definite shift towards family talk and kid exposure. She even cooked and ate bugs with her kids for the BBC.

-George Clooney says he and Amal will limit their travel to dangerous places now that twins are on the way. He also insists they spend more time together than we know (“People think we are never together, but we have not been separated for more than a week.”)

–George also says he’s tired of Trump and Bannon’s hypocrisy, reminding the world that they are part of the “Hollywood elite.” (“Donald Trump has 22 acting credits. He collects $120,000 a year in his Screen Actors Guild pension fund…Steve Bannon is a failed film writer.”)

–David Cross and Amber Tamblyn announced their new daughter and made fun of celebrity baby names at the same time.

-Crazy Ex-Girlfriend’s Rachel Bloom will be starring in a dark comedy with Adam Pally? Put it in my eyeballs now!

-The secret Oscar voter interviews are starting to trickle out, and they’re horrifying as usual. The first one features an actress who HATED Arrival (“It just sucked”), had a hard time voting for Best Actress (“I liked none of them”), and had strong thoughts on the foreign film category (“Germans are not funny!”). The second voter, a publicist, took a more measured approach, but still had some strong opinions (“Let me tell you, I did not understand The Lobster — it made me nuts”). Do Academy members even like movies?!

-The Honest Trailers crew took on this year’s Oscar nominations. I love the Fences bit.

-So what are the chances Matt Damon is going to “crash” Jimmy Kimmel‘s opening monologue at the Oscars? 97%?

-A huge Hollywood initiative has launched to battle gender inequality. There are big names connected to this.

-This Iron Fist featurette explains a lot more about the show than the trailers did.

–Charlie Hunnam pulls the sword from the stone (which sounds dirty but sadly isn’t) in the new King Arthur trailer.

-Here’s the trailer for First They Killed My Father, a Netflix film directed by Angelina Jolie. Her 15-year-old son Maddox has an executive producer credit on this thing.

–Jason Segel and Rooney Mara investigate the afterlife in The Discovery trailer. Seriously Hollywood, does she have to be cast in EVERY movie?? 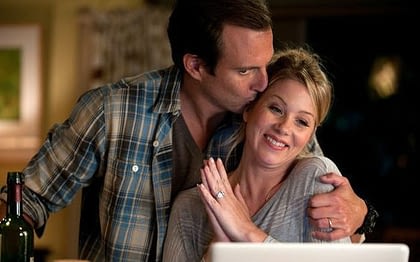 Christina Applegate Quits Up All Night