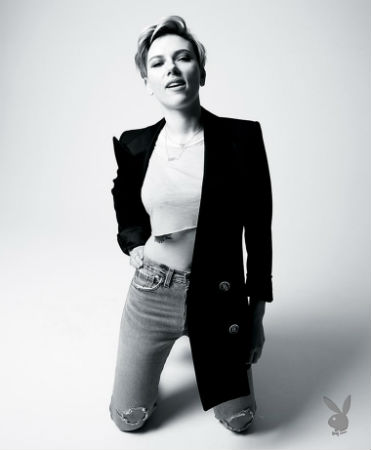 -In a new chat with Playboy, Scarlett Johansson says monogamy goes “against instinct.” In the interview, which seems to have taken place before she announced her split from hubby Romain Dauriac, she says “I might be skewered for that, but I think it’s work…The fact that it is such work for so many people — for everyone — the fact of that proves that it is not a natural thing.”

-Moonlight’s Mahershala Ali is looking all kinds of great on the cover of THR, where he shares his journey to becoming a Muslim.

-How exactly did Vogue think the world would respond to Karlie Kloss dressed as a geisha in 2017?! She’s since apologized.

-Not surprisingly, Christine Baranski had no problem looking disgusted at Trump’s inauguration in a scene for The Good Fight. Meanwhile, the show is getting good reviews.

-Even Pedro Pascal can’t convince me that the camo trend is a good idea, but I appreciate his attempts.

-As the world continues to burn, Colbert is staring to beat Fallon in the rating.

–M.I.A. makes it clear she’s not Rihanna, Madonna, Mariah, or Ariana Grande in her new song.

-Nice: Kumail Nanjiani‘s Sundance hit The Big Sick will be released this summer.

–Michael K. Williams talks about feeling typecast in this weird and awesome video. Why isn’t he in everything?!

–Robert Pattinson has been making weirdo fashion choices all week and he’s never been more interesting.

–Alanis Morissette is having a rough go of it. First, her manager admitted to stealing $7M. Now, a robber stole $2M worth of jewelry from her Brentwood home.

-Emails released in Kesha‘s lawsuit against Dr Luke reveal that he allegedly bullied her about her weight.

–Mae Whitman is returning to our TV screens and suddenly the world feels a little bit better.

-I liked this interview with 11 of the 683 new Academy members about what it’s like to have a say in who wins an Oscar.

-Speaking of interesting industry articles, here’s a good look at how each of the six major studios greenlights films now that studio owners are reluctant to give that authority to just one person.

-The LAPD may have ruined Sandra Bullock’s case against her alleged stalker by “illegally searching” his home.

Lindsay Lohan Got Punched In The Face