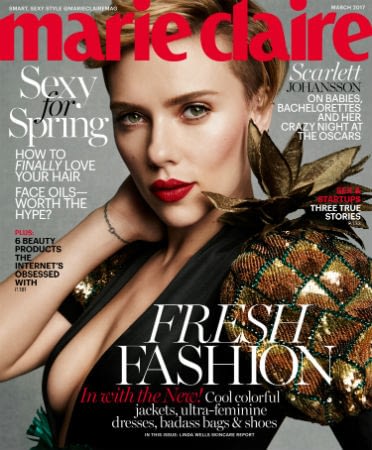 –Scarlett Johansson appears to stay mum on her recent split in her Marie Claire cover story, but she’s cool with talking about the time Mark Consuelos and Kelly Ripa accidentally ended up with her breast pump, so there’s that.

–Jamie Dornan and Dakota Johnson keep trying to convince the world that they like each other, which is adorable.

–Kanye West is now anti-Trump and has deleted all of his Trump tweets. A little late, but ok.

-Everyone is still talking about Melissa McCarthy playing Sean Spicer on SNL this weekend.

-Meanwhile, Kristen Stewart did a great job hosting. Her f-bomb was adorable (and she was very quick with her “and now I’ll never come back”), her monologue was great, and that Totinos sketch was perfection (especially when you consider how it built on the previous ones).

-Speaking of KStew, here’s the new trailer for her French thriller Personal Shopper which I really liked. Now everyone else has to see it so they can explain the ending to me…

–Chelsea Peretti and Jordan Peele are expecting a baby which is wonderful because I am weirdly invested in their relationship.

-No, Lady Gaga didn’t really jump off the roof live at the Super Bowl. That part was pre-taped, which explains the weird cut aways during that section. It was still a boss performance, tho.

-A ton of new trailers debuted during the Super Bowl last night, including Guardians of the Galaxy 2, Logan, Life with Ryan Reynolds and Jake Gyllenhaal, Baywatch, and F8 (which is heavy on The Rock and Jason Statham, which may explain Vin Diesel’s ‘tude).

-I’m glad I skipped The 24: Legacy premiere that aired after the Super Bowl which, according to the New York Times, was “intentionally or not, a one-hour Super Bowl ad for Islamophobia.” It’s strange because that was an issue with the original show, which they actually managed to correct.

-Whoa. Janice Min is stepping down from THR. (I met her once but was too scared to form actual words so it was just a lot of awkward nodding…)

–Mandy Moore‘s Walk to Remember reunion pic is exactly what I needed to start this week.

-Speaking of Mandy, this is an interesting take on how This Is Us could be reshaping network TV. Its success may make networks lean into “cathartic entertainment” and leave the gritty dramas to cable and streaming, which makes a lot of sense.

-Meanwhile, here’s the giant photo of all the nominees.

-Speaking of weird outfit choices by Michelle Williams, what is this dress?

–Damien Chazelle won big at the DGAs this weekend, which is one of the season’s most reliable predictors of Oscar-night glory. Despite a bit of backlash, I’m surprised how little the La La Land train has slowed down.

-This is refreshing: The Weeknd revealed that he had absolutely nothing to do with his fashion line.