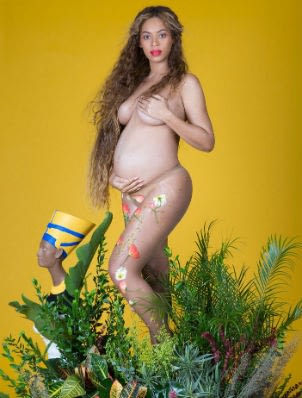 -First Beyonce announced her pregnancy, and now she’s released a whole bunch of images from her photoshoot. She really is single-handedly saving this year…

–Mariah Carey offered her congratulations to Beyonce (while reminding the world that she had twins first).

–THR’s cover story on Girls is great, depending on your Lena Dunham tolerance. She talks about starting with HBO (“It’s the worst pitch you’ve ever read — pretentious and horrifying — but I remember writing it, sitting on the floor listening to Tegan and Sara in my underwear, being like, ‘I’m a genius!'”), that rape/not-rape scene between Shiri Appleby and Adam Driver, and how Jack Antonoff warned her not to make stupid race jokes in public.

–Gabrielle Union says her “best anti-aging tip is the ability to say ‘no, no and hell no'”. Bless her!

–James Corden helped Aaron Paul return to Price Is Right and redeem himself after his massive fail 17 years ago.

–Drake and Nicki Minaj’s selfies were 100% directed at Meek Mill, no?

–Connie Britton offered some Southern perspective about humanity. And Salma Hayek sat next to her and didn’t interrupt her or call her “baby” once!

-This is a really interesting look at why young actresses won’t make romantic comedies anymore.

-I don’t watch Doctor Who but I’ll certainly start if Olivia Colman or Hayley Atwell take over the lead role.

-Well, this is something: Emile Hirsch’s assault charge might have cost him a TV gig.

–Dakota Johnson proves she can fit a whole bunch of stuff in her tooth gap.

–Christine Baranski is starring in the new spinoff of The Good Wife, which means we’re getting glorious new interviews and photo shoots. QUEEN!

-Here’s the new Ghost In The Shell trailer, starring Scarlett Johansson. which is set to air during the Super Bowl.