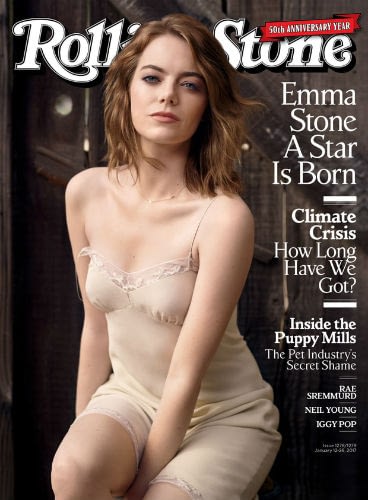 -In her new Rolling Stone cover story, Emma Stone talks about surviving pilot season, being protected by Louis CK, and learning not to improv on sets because she’s had directors give her jokes away to her male costars.

–Lena Dunham posted a public apology after making a “distasteful joke” about abortion — and it’s just as insufferable. “My words were spoken from a sort of ‘delusional girl’ persona I often inhabit, a girl who careens between wisdom and ignorance (that’s what my TV show is too) and it didn’t translate.”

-God bless whoever wrote out the entire plot of Passengers so we don’t have to see it.

-Maybe Franco was trying to distract us from all the bad reviews by dressing up like Beyonce.

-Speaking of movies getting bad reviews, it looks like there’s a reason Ben Affleck‘s Live By Night isn’t in the Oscar race.

-Stabler and Benson, together again! L&O’s Christopher Meloni and Mariska Hargitay had a holiday reunion.

-I had no idea that Riz Ahmed of The Night Of is a rapper who appeared on the Hamilton mix tape. Dude is having quite the year.

-What the hell did they make Rosie Huntington-Whiteley wear on the cover of Elle UK?

-So great to watch Sylvan Esso kill it on Fallon last night. I missed them!

-Stop being a savage and let BD Wong teach you how to properly eat a chicken wing.

-Sad but not surprising: while Kim Kardashian continues to recover from her traumatic Paris robbery, her brand is taking a hit.

–Megan Mullally once bought a $4,000 Valentino sweatshirt by accident. We’ve all been there.

-This is very sweet of Katy Perry and Orlando Bloom. I question whether kids would even know who he is, but still. Sweet.

-Who is petitioning Gal Gadot’s appointment as a United Nations ambassador? People suck.

–Billy Eichner brought Debra Messing back to the street.

Miranda Kerr Strips Down for GQ