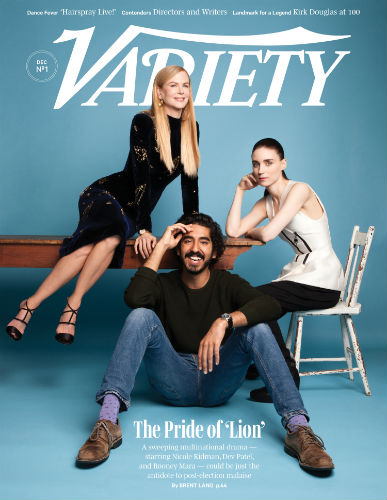 -On the new Variety cover, Dev Patel and Nicole Kidman are all smiles, while Rooney Mara is like “nah, I’m good.” (I was a bit more meh on their new movie than critics seem to be, but my friend and I both left the theatre saying “Damn! That Slumdog Millionaire kid grew up rul good!” So that’s something.)

–Madonna vogues and twerks in her first Carpool Karaoke promo.

-Prince Harry made a secret detour to see girlfriend Meghan Markle in Canada — and now she’s sporting a cute new necklace with the initials H and M.

–Matt Damon rejects your definition of “whitewashing” and offers his own. Cause rich white dudes should *totally* be the ones defining it.

-Buffy’s Emma Caufield is writing about This Is Us for EW? Yes please!

–Milo Ventimiglia continues to do push-ups — this time with Ellen DeGeneres on his back. He’s so charming now.  Remember when there were all those stories about him being a maybe not-so-nice dude when he dated Alexis Bledel and Hayden Panettiere? I’m glad he seems to have grown out of that.

-The Grammy noms are out and Beyonce is leading the way with 9, followed by Drake and Rihanna with 8, Chance the Rapper with 7, and Adele with 5.

–Amy Schumer defended herself against haters on Instagram after her Grammy nomination.

-Variety’s Mo Ryan just posted a great article talking to TV execs, showrunners and writers on why rape is used so often on TV and whether progress is being made regarding how it’s depicted.

–Jessica Chastain continues to be the best.

-I spent way too much time watching Katie Holmes’ appearance on GMA this morning and wondering if she was wearing a wig or not. Her bangs are mesmerizing these days.

-Don’t ask Helen Mirren for a selfie. It’s fine. Her beauty can’t be captured by a cellphone camera, anyway.

-Eek. Nicki Minaj is being criticized for mocking a mentally ill woman on Instagram.

-This is an excellent deep dive into why the Academy picked Jimmy Kimmel to host the Oscars. The Academy’s negotiating power with ABC has weakened following several low-rated Oscars in a row, so ABC scored several wins, including greater influence in the host selection process. (I’m guessing if the predictions remain true and critic darlings that mainstream audiences will never see like La La Land, Moonlight and Manchester By the Sea dominate the nominations, the ratings are going to dip even lower this year. 2016 was a weird year, in which no artsy blockbusters broke through. There’s no Gravity, Inception, The Martian or Mad Max-style box office hit to root for.)

-Meanwhile, Jimmy Kimmel and wife Molly McNearney have another baby on the way!

-NPR’s best albums/songs of the year is always such an awesome digital project.

–Felicity Huffman and Courtney B Vance just landed a new political comedy at ABC. I really want her to go back to comedy. She was so great in Sports Night.

-I’m so glad the media picked up on this Twitter thread that was going around during the weekend, started by a comic book employee who comforted a teen girl looking to learn more about Supergirl. It made me tear up when I first read it.

-Good read on how 2016 was the year the hourlong TV drama died (or at least took a back seat to miniseries and 1/2 hour comedies).

–Emma Watson lands a new job at a mysterious tech company in the trailer for The Circle, costarring Tom Hanks and John Boyega. I liked this book a lot.