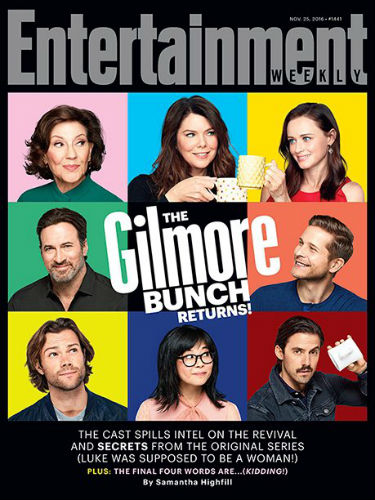 -The Gilmore Girls EW cover was revealed (what’s with Luke‘s hair?) on the same day that the review embargo was lifted. The general consensus about the revival: it’s messy but occasionally wonderful. TV Line says it’s “exactly like you remember, exactly what you need” (though they’ve basically turned into a fansite), EW gives it a B+, THR’s Daniel Fienberg (who’s always a tough sell) says it is “flawed, but a must for fans,” Alan Sepinwall calls it “kind of a mess, but one we’re glad exists,” Vulture says you may find yourself “more easily spotting some of the flaws that co-exist alongside its charms,” and Variety’s Mo Ryan (who’s opinion I most often agree with) says it’s “sometimes too overstuffed” but it remains “TV comfort food.” Good enough for me! Also, everyone seems to subtly imply that Alexis Bledel remains the weakest link which…yeah.

-God, I love when Michael Shannon is on a press tour. While promoting Nocturnal Animals, he admitted that he fell asleep during Batman V Superman, and then went OFF when asked about the election.

-In 1966, a 40-year-old Tony Bennett met a pregnant superfan backstage. Decades later, he married the baby.  HE MARRIED THE BABY, GUYS!

-You can listen to an excerpt from Anna Kendrick‘s audiobook here.

–Ryan Gosling is just as confused by his Hey, Girl internet fame as you are: “I’ve never said that…Do you remember when Fabio got hit in the face with a pigeon on the roller coaster and it broke his nose? Sometimes I feel like I’m the pigeon and the internet is Fabio’s face.”

–Ricky Martin is adorably awkward and nervous when talking about his marriage proposal.

-Guess I can just go ahead and delete all those episodes of No Tomorrow and Frequency from my DVR. CW (who doesn’t cancel anything!) has basically cancelled them. Also, they’re holding iZombie until spring. *pout*

–Mandy Moore says that when she met Justin Timberlake, he told her “You have big feet for a girl!” Charming.

–Taylor Swift topped Forbes highest-earning celeb under 30 list with $170 million, while the Kardashian/Jenners have six spots with $122 million.

-Everyone’s already calling the Best Supporting Actress Oscar race for Viola Davis. It still bugs me that she’s able to submit for supporting…

–Miles Teller tries to convince us that he’s grown up. Uh huh.

-Did you guys catch David Blaine’s special last night? The Margot Robbie trick was the weirdest, but my fave reaction was David Beckham‘s, when he was telling an off-screen Victoria about the frog trick. (Love that he calls her “Tor.”)

Adele’s Carpool Karaoke Is Just What We Need Today