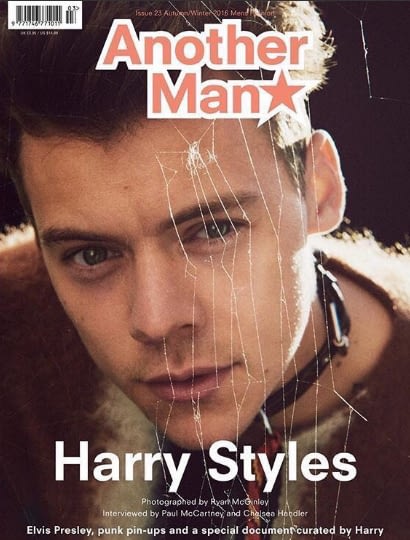 -This Harry Style cover doesn’t seem like anything special, until you notice the “Interviewed by Paul McCartney and Chelsea Handler” byline. Huh?

-Another Hollywood marriage bits the dust: Liev Schreiber and Naomi Watts are reportedly separating after 11 years together.

-Not surprisingly, it’s “highly unlikely” that Brad Pitt will be prosecuted for allegedly committing assault against his son.

-On the plus side, they reportedly had an “ironclad prenup” so there won’t be any fighting over their $400 million fortune.

–Angelina Jolie will still teach at London’s School of Economics following the split from Pitt. Geez, it’s almost as if her career is not dependent on her martial status or something. Crazytown.

–Jared Leto lost that lawsuit against TMZ over that Taylor Swift video but plans to appeal, saying “this isn’t just a legal issue, it’s a moral one.” Sure thing, buddy.

–Lupita Nyong’o rapped to celebrate hitting 3 million Instagram followers. Between this and her recent gushing over Beyonce, I think I love her.

-The Will & Grace cast had a reunion this weekend that was intensely documented for social media. They’re clearly shooting something — is it a Clinton ad?

-Meanwhile, Kim Kardashian wants you to know that she is most definitely voting for Clinton.

-It’s kind of a big deal that actors can now get their ages removed from IMDb.

–Priyanka Chopra says Tom Hiddleston made her twirl on the Emmys stage. That bastard!

-Hmmm…it’s one thing for Ben Affleck and Jennifer Garner to be hanging out together at family events, but what’s with the kid-free dinner dates? And breakfast dates.

-I don’t know why, but I love it when famous people crash wedding photos. Tom Hanks just did it in Central Park.

-There’s a new Tegan and Sara music video to kick off your week. Is that Reggie Watts?

-Speaking of Reggie, the cast of You’re The Worst is on the latest Comedy Bang Bang podcast.

-Congrats to Josh Brolin, who got married this weekend.

-This photo is making me feel really bad for Kate Hudson right now...

-If you were famous, you were probably at this wedding in France this weekend.

-7th Heaven star Catherine Hicks said she’d be open to a reunion show, but only if her TV husband Stephen Collins’ character was dead.

-I don’t watch Last Man On Earth, but I would have had I known there was a Mad Men reunion on the last ep.

-Everyone’s talking about how well The Magnificent Seven did this weekend, but is $35M a strong opening for a $90M action film starring Denzel Washington and Chris Pratt?  Tracking had predicted a $40M bow.

–Courteney Cox’s fiance got a tattoo of her initials, which seems like a swell and totally not-regrettable decision.

–Drake just dropped a short film called Please Forgive Me. Just in case you forgot about him for a second there.

–Lil Wayne wrote a book about life in prison and it includes tidbits about performing a gay marriage ceremony for two other inmates and finding out his girlfriend had hooked up with Drake while he was stuck on the inside. Imma need to read that right now.

-Luke Cage fanboys over Method Man and gets a new hoodie in the latest Netflix trailer. The new season is getting stellar reviews.