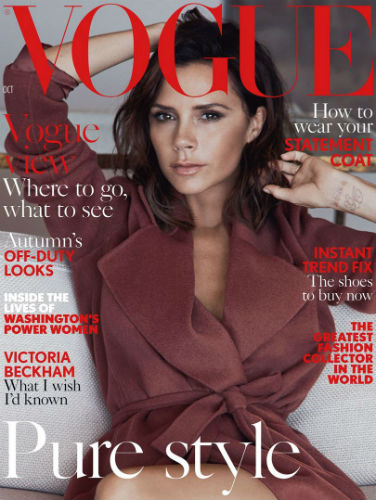 –Victoria Beckham looks great on the cover of Vogue UK, even if the accompanying story employs one of my least favourite devices: writing a letter to your teenage self. On meeting David Beckham she writes, “Yes, love at first sight does exist. It will happen to you in the Manchester United players’ lounge – although you will get a little drunk, so exact details are hazy.”

-Meanwhile, a new BBC doc reportedly reveals British Vogue’s editor pulled one over on Anna Wintour  so that the UK Rihanna cover debuted the same month as the US one. This is so Devil Wears Prada and I live for it!

-Do you subscribe to Lena Dunham‘s newsletter, Lenny? It’s usually a pretty good read, but Dunham’s interview with Amy Schumer is decidedly NOT good. They both live up to the worst things people say about them, with Schumer saying of Kurt Metzger “Why are these women treating him like he raped someone? He’s not Bill Cosby; Kurt has never raped” and Dunham surmising that the only reason Odell Beckham Jr didn’t want to talk to her at the MET Ball was because “he looked at me and he determined I was not the shape of a woman by his standards.” (I haven’t even gotten to the part where Dunham equates a ruptured ovarian cyst to rape trauma.)

-I really hope this story about how Britney Spears felt lied to by the VMAs because she “thought she was the headliner” is fake. Mostly because I already feel so bad for her for having to follow Beyonce.

-The smutty plot thickens: Rihanna got that Drake shark tattoo while in Drake’s dressing room!

–Wilmer Valderrama continues to convince us that he has a magic penis by rebounding from  Demi Lovato with Minka Kelly.

-Remember a couple of weeks ago when Aaron Paul interviewed the little girl from Stranger Things and promised to adopt her? It happened.

–Gabrielle Union, who both stars in Birth of a Nation and is a rape survivor, penned a moving essay on Nate Parker: “I cannot take these allegations lightly.”

-I love following Lexi Alexander on Twitter because she’s outspoken, exposes a lot of inside baseball tidbits about TV production, and almost never screws up. But she did (kind of adorably) this morning.

-Best worst TV headline of the week: NBC is turning Oliver Twist into a sexy procedural.

-Yay! A new Sylvan Esso song to kick off the long weekend!

-I somehow missed this video of James Corden singing “Nothing Compares to You” during Coldplay‘s concert. It’s kinda great.