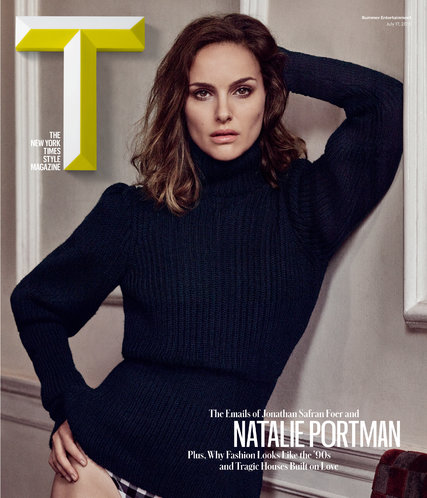 –Natalie Portman and Jonathan Safran have emailed each other for more than a decade, and shared some of their correspondence in New York Times’ T magazine. Though they’re beyond pretentious, she’s definitely the one doing the heavy lifting in these chats — but it’s all weirdly undercut by the accompanying photos of her without pants. Sigh. So close, guys!

–Kristen Stewart and Nicholas Hoult bonded for Equals by skateboarding at 4 a.m., late-night drinking in a bar and go-kart racing. The rest of us are in the wrong line of work, y’all.

–Julie Klausner said Page Six lied about her comments about Gwyneth Paltrow — so they came back to her with a handful of receipts.

-I’m pleasantly surprised by my lack Emmy rage blackouts today! Overall, this was a really good batch of nominations. I’m especially happy for all the love thrown at The Americans (usually shows this deep into their run of Emmy snubs can’t dig themselves out of it ), as well as the nods for Tatiana Maslany, Constance Zimmer, Better Call Saul, Maura Tierney and Catastrophe (for writing).  It wasn’t all perfect — I would have preferred  Christine Baranski over Emilia Clarke, Rachel Bloom over Laurie Metcalfe, Orange Is the New Black over House of Cards, Oscar Isaac over Cuba Gooding Jr, The Leftovers over Downton Abby,Justin Theroux over Kevin Spacey, and Jessica Jones over almost everything — but still, I’m happy with most of the major categories. I’m also thrilled that The Good Wife’s craptastic final season was totally shut out.

-Also good: for the first time in Emmy history, all six lead acting categories include nods for people of colour. (It’s not perfect, though: not a single supporting actor/actress of colour in a drama was nominated.)

-Bloodline’s Kyle Chandler found out about his nom while taking out the trash. (Which is what that show is. Amirite?)

–Bryan Cranston’s talks about the iconic Breaking Bad “I am the one who knocks” scene.

–Lea Michele and the Glee cast paid tribute to Cory Monteith yesterday on the third anniversary of his death.

–Ariana Grande and Jimmy Fallon made a Snapchat music video, which is supposed to be a joke but seems too much like something that will eventually happen.

–Britney Spears just debuted a new song, “Private Show,” and she looks fantastic in the video.

-Happy Ghostbusters Eve! Enjoy this delightful new Seth Meyers interview with Kate McKinnon. (“My fondest wish is to live as Nick Offerman”), and this Kristen Wiig interview with Jimmy Fallon, in which she plays Bachelorette JoJo, despite knowing nothing about The Bachelorette .

-You can watch the terrifying first 8 minutes of Netflix’s new series Stranger Things.

–The Hollars trailer, directed by John Krasinski and costarring Anna Kendrick and Margo Martindale, is designed to make you cry.

Nina Dobrev Gets Bendy for Self