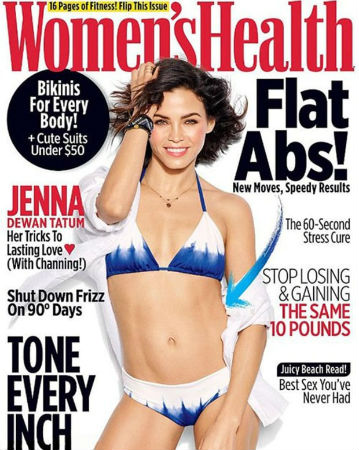 –Jenna Dewan poses in a bikini on the cover of Women’s Health with a giant arrow pointed at her abs. That’s the stuff of my nightmares. In the interview, she talks about being a vegan around her vegetable-hating hubby, and how her social media posts are not exactly true to life. “Instagram is just a highlight reel. Ten percent of the time, Chan and I have a lot of fun. Ninety percent, we’re really boring.”

-It didn’t take long for Jamie Foxx and Katie Holmes‘ camps to make Claudia Jordan backpedal hard on her comments about them dating. Sorry, no take backsies!

-This is an interesting look at Taylor Swift’s artistic growth (or lack thereof).

-Speaking of great reads by MTV News, this piece on Blake Lively’s enduring fame is both savage and awesome. “There’s a particular freedom from anxiety that comes with looking at Blake Lively, as if her pleasant blankness could be contagious. ”

-Meanwhile, Blake “never meant to offend anyone” with her post about Oakland booty.

–Gwyneth Paltrow says she’s intentionally trolling with some of the items she features in GOOP. Sure, Jane.

–Demi Lovato‘s Twitter break lasted less than a day. But she vowed to “coming back more honest than ever” so lucky us, I guess?

-There is a celebrity dating app?? It behooves us all to sign up immediately and screencap everything we see. BEHOOVES US!

-These photos of Fergie remind me that she’s still my favourite royal. Or royal adjacent.

–Aaron Sorkin is going to mansplain about screenwriting in a new online course. Who’s going to be the one to break it to him that this means he’ll have to use the Internet?

-I want great things for Archie Panjabi’s career. I’m not sure Blindspot is it.

-Not gonna lie: the idea of Jennifer Garner and Michael Vartan rekindling their romance makes me so giddy that I’m just going to block out all the obvious signs why this story seems super fake.

-“She doesn’t have the range” is my new favourite meme. They’ve been floating by on my Twitter TL all day and have never failed to make me guffaw.

–Selma Blair has apologized to fellow passengers after her outburst on a flight. I’m still worried. I love that girl. Besides being Cecile Caldwell and Vivian Kensington, she was in this dumb little movie called Kill Me Later that I’ve watched no fewer than 30 times. True story.

-Mr. Robot, The People v. O.J. Simpson and UnREAL lead the nominations for the TCA Awards (aka – the Emmys but with taste).

-Wait, so critics actually don’t hate Independence Day: Resurgence? I did *not* see that coming.

-Ouch! Uma Thurman has a few broken bones after being thrown off a horse.

–Bryan Cranston joined the Power Rangers movie. Hasn’t this thing been already shooting in Vancouver for a while? And also — what?

-Speaking of Power Rangers cast members, Elizabeth Banks says she auditioned to play Mary Jane in 2002’s Spider-Man, but she was deemed too old at the ancient, decrepit age of 28.

-After all the sad Prince news, here’s a glimmer of hope: a DNA test proved a Colorado inmate is not late singer’s son.

–Angelina Jolie condemned the Orlando shootings during a speech at the U.S. State Department yesterday.

-I love how much fun the Game of Thrones cast seems to have behind the scenes.

-Speaking of behind-the-scenes TV instagrams, I feel like OITNB’s Kimiko Glenn might be wearing the Sandro dress I just bought, greatly lessening my buyer’s remorse. (Which will undoubtedly grow again once my Visa bill arrives.)

-This is a really great interview with one of the stars of OITNB but DO NOT CLICK until you’ve watched the whole season. (And if you have, do you need a hug?)

-I really enjoyed this Anthony Bourdain interview. How is he 60?!

-HBO has canceled Vinyl, probably because no one watched it. Also, it was terrible.

-Here’s a new trailer for HBO’s Divorce with Sarah Jessica Parker. It’s from the same person who created Catastrophe so I’m all in.

Jennifer Aniston Is the World’s Most Beautiful Person