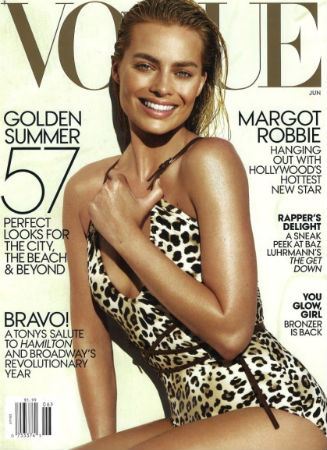 -This Margot Robbie cover is… certainly something. As the Fug Girls note, it looks like she is auditioning for a Goldfinger remake.

–Jennifer Garner is reportedly not dating the guy everyone assumed (incorrectly) is her accountant. Bummer.

–Bill Simmons will interview Ben Affleck on the premiere of his HBO show. I hope Salty Ben shows up. Have you heard this DVD commentary that made the rounds yesterday?

-This story about Jake Gyllenhaal hitting on women who are eating alone makes me happy on so many levels.

-The best thing about the Taylor Swift/Tom Hiddleston pairing (so far — I expect greatness from these two) is all the articles coming about on the mechanics of staged photo ops. This one with a professional pap offers lots of insight.

–Demi Lovato just picked the wrong side of the Mariah/JLo feud.

-Speaking of feuds, we can all rest easier now: Beverly Hills, 90210’s Tori Spelling and Tiffani Thiessen have ended their 10-year feud.

-A silly thing that my friend Kat wrote about The Simpsons has turned into a Vulture think piece. Points to the internet!

-So Vogue’s Amy Schumer cover story is … not good.

–Gillian Anderson says she has not been approached about more The X Files. Jesus, not this again.

-Watching Prince William get scolded by the Queen took me to my happy place.

-Speaking of my happy place, this is what Nicole Kidman will look like in Top of the Lake. Holy shit.

-It’s supposed to be insanely lovely outside this weekend so I’m going to resist the urge to stay indoors and binge all of OITNB (even though Mad Men’s Matt Weiner directed episode 12 and by all accounts it’s spectacular). But I’m going to watch the premiere at least, if only for this brutal Bill Cosby joke.

-The CW announced its fall premiere dates and all of their shows don’t return until October.

-Is there a nicer celeb in Hollywood than The Rock? Doubtful.

-Here’s the first trailer for Netflix’s David Brent: Life on the Road.